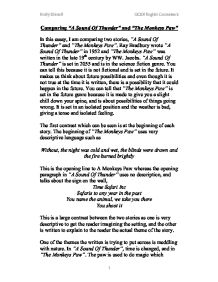 In "A Sound Of Thunder", magic wasn't used to change nature, but an unnatural time machine. Even though both ways in which nature is changed are different, you can see that thgere is a link where they both change the future. Reading both stories, I found that some of the characters in each, both are dissatisfied with something in their lives, and have tried to improve the situation by trying to change the future for the good, but actually, greed has overcome them, them and has turned around on them, giving them unwanted consequences. I think that greed is a theme throughout both stories, as in "A Sound Of Thunder", Eckels says, Shooting my dinosaur As to say he owns it, or that he is superior to other hunters that may want to shoot the same species. Also, in "The Monkeys Paw", Herbert says Well wish for two hundred pounds then, that'll just do it Which shows he wants money without earning it. ...read more.

In A Monkeys Paw, the family are in a traditional situation and where there is a death, it is a big loss in the story, as love seems to be a theme as well in this story, whereas, in "A Sound Of Thunder", the death of Eckels is not grieved, as he is not killed during the story, but at the end, so we can see that he may be not is loved by other characters in the book. My favourite story was A Monkeys Paw, as it was more built up and less obvious of what was going to happen. IT was in the horror genre, which is also a reason a lot of people would want to read this story, and keeps you hooked to the end. In "A Sound Of Thunder", it is very predictable of what will happen and it is set in the future, so cannot be pictured as easily for us. Emily Shimell GCSE English Coursework 1 ...read more.