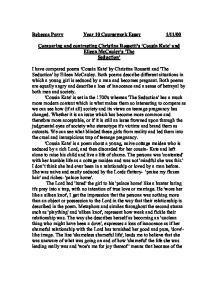 Rebecca Perry Year 10 Coursework Essay 1/11/00 Comparing and contrasting Christina Rossetti's 'Cousin Kate' and Eileen McCauley's 'The Seduction' I have compared poems 'Cousin Kate' by Christina Rossetti and 'The Seduction' by Eileen McCauley. Both poems describe different situations in which a young girl is seduced by a man and becomes pregnant. Both poems are equally angry and describe a loss of innocence and a sense of betrayal by both men and society. 'Cousin Kate' is set in the 1700's whereas 'The Seduction' has a much more modern context which is what makes them so interesting to compare as we can see how (if at all) society and its views on teenage pregnancy has changed. Whether it is an issue which has become more common and therefore more acceptable, or if it is still an issue frowned upon through the judgmental eyes of society who stereotype it's victims and brand them as outcasts. We can see what blinded these girls from reality and led them into the cruel and inauspicious trap of teenage pregnancy. 'Cousin Kate' is a poem about a young, naive cottage maiden who is seduced by a rich Lord, and then discarded for her cousin- Kate and left alone to raise his child and live a life of shame. ...read more.

'The Seduction' is a poem of a very similar theme to 'Cousin Kate', but the young girl is seduced by a boy she meets at a party. The setting of the poem- Birkenhead docks- where the seducer leads the girl and the way it is described is almost chilling. Words such as 'frightening scum' and 'septic wound' are both effective and frightening. The first few lines of the poem immediately give us an impression of what the seducer is doing and exactly what the scene is like. Lines 2,3 and 4 create a sense of isolation. The line 'blind windows' represent how alone the girl is, that no one will see what is going on and no one will help her. I think that the line 'away from the quiet bricks of Birkenhead docks' might mean that the only thing that can see what is going on are these bricks and they can't tell anyone. For the first part of the poem, the persona is drunk. She is very confused, unaware of what is happening and completely in a world far from the harsh reality. The poem constantly reminds you of the innocence that is the persona with words like 'giggle', 'wide blue eyes' and 'high white shoes', whereas the seducer is obviously less innocent ...read more.

Teenage magazines have come a long way in the form of informing young girls and Boys about the dangers of unprotected sex. Though magazines have become more informative, teenage pregnancy is still a very 'awkward' and 'touchy' issue which is seen as unacceptable by the majority of today's society. The story of Cousin Kate is a much less controversial and twisted tale. It has a very 'fairy tale ' like context and it seems to be more structured with a distinctive beginning, middle and an end. It has a very simple 'sing-song' like structure which again makes it much less emotional. Although, the Seduction also has a subtle hidden 'fairytale' like theme as well with lines like 'enchanted' and 'wide blue eyes,' but I think their purpose is to portray an image which the persona has of the seducer on the night of the seduction. During the second half of 'The Seduction', the way in which the persona's thoughts of what she is missing are put across, in a blurry, subconscious- like pattern, adds to all the confusion and emotion which the girl is experiencing that day after she discovers she is pregnant. The 'stream of thought' -like verses in which her mind thinks back to all the promises made by her object of blame; the teenage magazines also adds effectively to the overall emotion which the poem brilliantly evokes. Rebecca Perry 10CP ...read more.