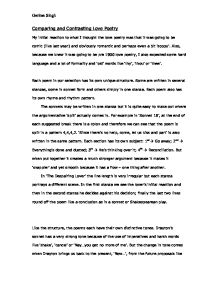 Comparing and Contrasting Love Poetry My initial reaction to what I thought the love poetry was that it was going to be comic (like last year) and obviously romantic and perhaps even a bit 'soppy'. Also, because we knew it was going to be pre 1900 love poetry, I also expected some hard language and a lot of formality and 'old' words like 'thy', 'thou' or 'thee'. Each poem in our selection has its own unique structure. Some are written in several stanzas, some in sonnet form and others simply in one stanza. Each poem also has its own rhyme and rhythm pattern. The sonnets may be written in one stanza but it is quite easy to make out where the argumentative 'split' actually comes in. For example in 'Sonnet 18', at the end of each suggested break there is a colon and therefore we can see that the poem is split in a pattern 4,4,4,2. 'Since there's no help, come, let us kiss and part' is also written in the same pattern. Each section has its own subject: 1st --> Go away; 2nd --> Everything's done and dusted; 3rd --> He's thinking over it; 4th --> Reconciliation. ...read more.

We can compare Michael Drayton's silent threat, when he is suggesting that if she leaves him he will die but he can still live if she gives him what he wants, to what Marvell wants from his love. They are both asking for the same thing but Drayton slips it into his poem whereas Marvell comes straight out with it. Now even though the poems were written in different time periods, lovers - in this case the poets - still complimented their loves on the same things; naughty or nice. Shakespeare compared his love 'to a summer's day' which can be considered the best and most beautiful time of year. Burns compared his love to 'a red, red rose that's newly sprung in June'. The connotations 'red' and 'rose' are still used widely in today's modern times to describe our loved ones. We think Byron is describing his cousin in 'She Walks In Beauty'. We know he met her at a party and she was wearing black mourning clothes 'like the night'. He praised her purity that was like 'cloudless climes' and her eyes like 'starry skies'. ...read more.

But not all the poems were like that. Lord Byron and Robert Burns were very romantic and complimented their loves 'eyes' and 'smile' which probably is just as common today thinking of valentines cards nowadays and love comments. Burns' idea of his love lasting 'till a' the seas gang dry' and 'the rocks melt wi' the sun' is so touching and infact these are quite the type of things - I believe - that a modern girl today would love to hear. I particularly liked the idea that woman were just as demanding for respect in the olden days as they are today after reading Christina Walsh's 'A woman to her lover'. I don't think we would expect a woman of that time period to think in such a thoughtful way and be so unaccepting of a man's chauvinism. It just proves that even women haven't changed and they do demand respect no matter how brainwashed they are. All in all, it was fun and the poem 'The despairing lover' added some humour to the subject and some were even shocking to know that men could write a love poem to another man, like Shakespeare did. ?? ?? ?? ?? Garima Singh ...read more.