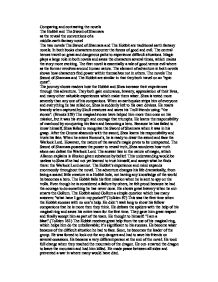 Comparing and contrasting the novels The Hobbit and The Sword of Shannara as the reveal the conventions of a middle-earth fantasy novel The two novels The Sword of Shannara and The Hobbit are traditional earth fantasy novels. In both books characters encounter the forces of good and evil. The central heroes travel on great and dangerous paths to experience difficult situations. Magic plays a large role in both novels and saves the characters several times, which makes the story more exciting. The first novel is essentially a tale of good versus evil where as the former revolves around human nature. The element of adventure in both novels shows how characters find power within themselves not in others. The novels The Sword of Shannara and The Hobbit are similar in that they both travel on an "epic quest". The journey shows readers how the Hobbit and Shea increase their experiences through this adventure. They both gain endurance, bravery, appreciation of their lives, and many other valuable experiences which make them wiser. Shea is tested more severely than any one of his companions. When an earthquake strips him of everyone and everything he has relied on, Shea is suddenly left to his own devices. He reacts bravely when captured by Skull creatures and saves his Troll friends using: "the stones". ...read more.

The Hobbit receives great help from the use of his magical ring, which helps him do the unbelievable; it's significant to his success. He become wiser because of the difficult situation he had to face. Soon, he becomes the leader of the group. He was forced to look out for any dangers and had to save his friends on several occasions. He became a very different person at the end of the novel. He took full charge when they reached the mountain of the dragon. He out- smarted the dragon to leave the mountain and had him killed. He made peace between all sides and prevented a war in where many would have died. The characters soon come to realize that the "epic quest" is not something done for others but for themselves. The journey was for them to find courage and power within themselves not others. Shea learns to understand that the sword of Shannara does not have any magical power in it but holds the truth, which he had to learn and understand. He was forced to vanish when the monstrous Skull Bearer appeared in Shady Vale, dispatched by the Warlock Lord to kill him. He believed at the time that he had to kill the Warlock physically not mentally. ...read more.

Their main concern is to get the Sword at all cause and consequences. The only important person in the team is Shea since he is the only one who can defeat the Warlord. The Hobbit is more about discovery and learning. The characters take a challenge in order to fulfill their lives, especially the Hobbit. He has learned so much. He changed his prospective on thinking and the world. His life becomes fulfilled. J.R.R. Tolkiens quest was not based on winning or losing but achieving your goals. Everybody in The Hobbit got a chance to do that. Tolkien's quest was about putting missing pieces into ones life. In both novels the journey helped characters gain something from the epic quest. They learned that courage, bravery and acceptance is something that you must work on. Character also began to understand that life is not easy but a challenge. The Hobbit and Shea build their knowledge and wisdom through harsh experience, which at times almost brought death about them. Both characters were forced to fight evil, Shea more then the Hobbit but both learned that it is mentality that helps u live through the hard times not physical power. These novels show us that from being simple people anybody could become a hero if they have the strength to handle it. ?? ?? ?? ?? ...read more.