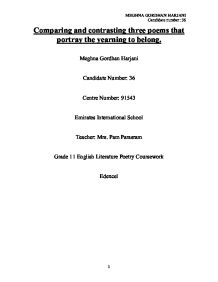 Comparing and contrasting three poems that portray the yearning to belong.

I believe that the titles of each poem represent the reason for the narrators' inability to belong. "My Parents kept Me from Children who were Rough" suggests how the poet blames his parents for not being able to bask in the pleasures the bullies experienced, as they were very protective of him. I get the impression that he envied the other children's freedom, in contrast to his restricted life enforced upon him. On the other hand, the title "An Unknown Girl" has a double meaning as it could refer to the actual girl hennaing the poet's hand or it may refer to the poet itself. The poet finds this culture overwhelming yet admires it, and she strongly craves to be a part of it. Moreover, the title "Crabbit Old Woman" itself illustrates the way the old woman is perceived by the nurses. This stereotypical image is what prevents the nurses from exploring the real "old woman" and prevents her from belonging into their world. Structure aids a reader to visualise a poem and the free verse structure in An Unknown Girl expresses the narrator's exploration of thought and conveys her dream-like admiration. ...read more.

I chose these poems as I felt I could relate to them very well. I can understand Alvi's situation, as I myself am away from my country of origin and often I find myself indulging in a more foreign culture, yet many a times I get nostalgic about the place I come from, despite feeling detached and distant from it. In addition, I think I could share my thoughts and feelings very well with My parents... as it is about a young adult, just like me. Fitting in and being part of a group of children is very vital and therefore, I solemnly sympathize with the narrator. Lastly, I think Crabbit Old Woman deals with a great problem of stereotypical images, which are present in all works of life. It was inspiring to see the old woman standing up against these stereotypical images created by society. The poem made me to realize that I need to offer more respect and admiration for the older generation. All the three poems are written in a unique style and each one conveys very deep issues, in accordance with the universal theme of belonging. All the poets were very much successful in conveying their ideas and they were able to create a lasting impact upon the readers. ?? ?? ?? ?? MEGHNA GORDHAN HARJANI Candidate number: 36 1 ...read more.