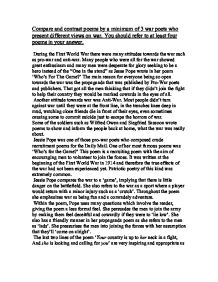 Compare and contrast poems by a minimum of 3 war poets who present different views on war. You should refer to at least four poems in your answer. During the First World War there were many attitudes towards the war such as pro-war and anti-war. Many people who were all for the war showed great enthusiasm and many men were desperate for glory seeking to be a hero instead of the "One in the stand" as Jesse Pope wrote in her poem 'Who's For The Game?' The main reason for everyone being so open towards the war was the propaganda that was published by Pro-War poets and publishers. That got all the men thinking that if they didn't join the fight to help their country they would be marked cowards in the eyes of all. Another attitude towards war was Anti-War. Most people didn't turn against war until they were at the front line, in the trenches knee deep in mud, watching close friends die in front of their eyes, even sometimes causing some to commit suicide just to escape the horrors of war. Some of the soldiers such as Wilfred Owen and Siegfried Sassoon wrote poems to show and inform the people back at home, what the war was really about. Jessie Pope was one of those pro-war poets who composed crude recruitment poems for the Daily Mail. One of her most famous poems was 'Who's for the Game?' ...read more.

The terrible physical condition of the men is also illustrated with the line 'Knock-kneed, coughing like hags, we cursed through the sludge.' The simile compares the soldiers' physical condition to that of witches, and creates the image of very old wrinkled women slowly stumbling through thick mud. The word 'trudge' is an onomatopoeia used to emphasize the fact that the pace is tremendously slow. It portrays the image that it takes a lot of effort for them to take every step. 'All went lame; all blind' emphasizes that the war affected everyone and the fact that Owen uses personification to describe the shells as 'tired', gives the impressions that he thinks that the war is pointless and had been occurring for too long. In the second stanza there is suddenly a big contrast and the mood instantly changes. The pace speeds up to a much faster, more panicky mood. 'Gas! GAS! Quick, boys!' is the first few words written in the second stanza. It immediately highlights the speed of this section and that everything is happening unexpectedly and urgently. The image created is that all the men are in 'an ecstasy of fumbling', unaware of their fate. The word 'ecstasy,' is ironic as it gives the impression of extreme joy, yet the opposite emotion would be expected. Owen uses this line to try and portray a gush of energy. 'Fitting the clumsy helmets just in time,' and words like 'stumbling' are used to create the image that the process is urgent, life threatening and dangerous. ...read more.

This stanza generates great sympathy as it is a tragic waste of life. Like Owen he shows the reality of war. In the third stanza, Sassoon directs the poem at 'You' in an accusatory fashion. The 'smug-faced' crowds have no real concept of what it means to fight in a war. Sassoon powerfully advises them to 'Sneak home and pray you'll never know/The hell where youth and laughter go'. Like Owen he scolds the people and poets, who cheered and encouraged the men to enlist. In conclusion, I feel that all 3 poets are just as effective in their writing, yet Jessie Pope presents very different pictures of war to that of Owen and Sassoon. Owen and Sassoon are excellent examples of poetry portraying the realism of war whereas Pope's poem is an excellent example of the unfortunate attitude of those people back at home, who had not experienced war at all. Jessie pope aimed her poems towards young men in general, with the aim of persuading them to enlist in the forces. Yet Owen and Sassoon aimed their poetry towards a different audience, they scolded the people that had not experienced war, making them feel guilty for once encouraging and sending so many innocent men to their death. All poets are very successful in portraying their aims and views of war. Each poem was just as convincing. In my opinion I believe that Sassoon's poem and use of language is the most effective as it explains the harsh realities of life at war and the fact that he informs his readers that the war did not only affected men physically but also psychologically creates great sympathy. ...read more.