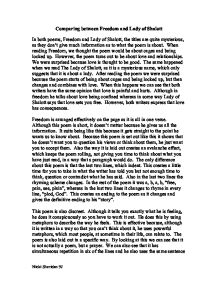 Comparing between Freedom and Lady of Shalott

Comparing between Freedom and Lady of Shalott In both poems, Freedom and Lady of Shalott, the titles are quite mysterious, as they don't give much information as to what the poem is about. When reading Freedom, we thought the poem would be about cages and being locked up. However, the poem turns out to be about love and relationships. We were surprised because love is thought to be good. The same happened when we read The Lady of Shalott, as it is a mysterious name, which only suggests that it is about a lady. After reading the poem we were surprised because the poem starts of being about cages and being locked up, but then changes and combines with love. When this happens we can see that both writers have the same opinion that love is painful and hurts. Although in freedom he talks about love being confined whereas in some way Lady of Shalott says that love sets you free. However, both writers express that love has consequences. Freedom is arranged effectively on the page as it is all in one verse. Although this poem is short, it doesn't matter because he gives us all the information. It suits being like this because it gets straight to the point he wants us to know about. Because this poem is set out like this it shows that he doesn't want you to question his views or think about them, he just want you to accept them. Also the way it is laid out creates an avalanche effect, which keeps the poem rolling, not giving you time to think about what you have just read, in a way that s paragraph would do. The only difference about this poem is that the last two lines, which indent. This creates a little time for you to take in what the writer has told you but not enough time to think, question or contradict what he has said. ...read more.

Even by reading the title we can get first impression that the poem has a sense of mystery and royalty. We can see this by noticing that she is called "the Lady" of Shalott. This creates mystery by not giving a hint as to what the theme of the poem was or the outcome. We also notice the length of the poem is long and is split into parts and then into paragraphs. This creates an effect on us about the detail given in this poem. We can also guess at what type of poem it. We know that Freedom is a statement therefore Lady of Shalott almost has an opposite length so we now that it is not a statement. We also know that it isn't a prayer because it has no religious theme in it. Also it is written about someone not ones self. So by narrowing down the opportunities and judging by the length we can guess that it is a story or a narrative poem. By now we can also see that these two poems are very opposite, just like fact and fiction, poem and story. This is true, however when skimming through the poem we can see that the basis of the story is similar-love. They are both about what love can do once you let it take over. In both poems they tell us that love hurts. The Lady of Shalott however does it more conspicuously by embedding it into a story. Freedom is very forward about the pain caused by using powerful description to tell us what he was feeling. By looking over the Lady of Shalott we cannot only see that it is long but also that it is split up into parts. This is another indication that it is almost a story. We also know that there must be a beginning, middle and an end to the poem because of its length, just like a story. ...read more.

She does this by writing her name on the wall. This could be either to show the ending of her, or to show Sir Lancelot her name. These maybe ina last attempts to have him know her. However, in the last paragraph we find that he didn't even know her and plainly says, "She has a lovely face". After reading Sir Lancelot's' response we can see that the choice she made was a bad one. After she gave up everything to see him clearly, the story tells us that it was all for nothing. We can draw from this that one moral of the poem is that love has consequences. So now we have evaluated both poems separately, we can we can find links from one to the other. As soon as you finish reading both poems we can draw the conclusion that they are both relating to love. However, the links go much deeper than this, maybe even to the writers' private feelings. We can see that Freedom is telling us that love can be good, but it has consequences of hurt and controlling. We can see this by looking at the powerful metaphors he uses to describe the past tense. We can see this also in the Lady of Shalott only more subtly. We know that she was happy when in her tower, watching the world through a mirror, until love came along. Her world starts to tumble once this sparkly, dazzling man come into her life and she takes the risk and looses everything. So we can see that this poem too, is telling us that love has consequences. However, in the Lady of Shalott these consequences were greater than those in Freedom, as in Freedom it is was painful emotion, whereas in Lady of Shalott it was death. This is where we might get the idea that both writers have had bad experiences about love in similar ways. Both poems are trying to give you a down perspective of love, but as said previously, it may increase our desire to love. Nicki Sheridan 9J ...read more.