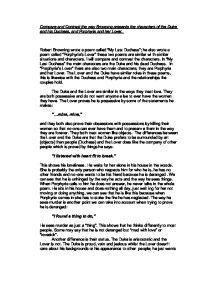 Compare and Contrast the way Browning presents the characters of the Duke and his Duchess, and Porphyria and her Lover. Robert Browning wrote a poem called "My Last Duchess"; he also wrote a poem called "Porphyria's Lover" these two poems are similar with similar situations and characters. I will compare and contrast the characters. In "My Last Duchess" the main characters are the Duke and his dead Duchess. In "Porphyria's Lover" there are also two main characters; they are Porphyria and her Lover. The Lover and the Duke have similar roles in these poems, this is likewise with the Duchess and Porphyria and the relationships the couples hold. The Duke and the Lover are similar in the ways they treat love. They are both possessive and do not want anyone else to ever have the women they have. The Lover proves he is possessive by some of the statements he makes: "...mine, mine," and they both also prove their obsessions with possessions by killing their women so that no-one can ever have them and to preserve them in the way they are forever. They both treat women like objects. The differences between the Lover and the Duke are that the Duke prefers to be surrounded by art (objects) ...read more.

He shows his love. The Duke chose "never to stoop" to the Duchess' level like Porphyria stoops to the Lover's level. The Duke and the Lover are both very possessive, but they love different possessions. The Duke loves money and art (objects). The Lover loves Porphyria. They both love their partners but they differ in the way they show it. They are both possessive of them. They are so possessive of their partners that they kill them so that no one else may ever have them. There is another difference here: the Duke "gave commands" to have the Duchess killed (he has her assassinated), but the Lover does it himself. Does this mean anything? Or was it just the situations they were in? The Duke kills his partner to prevent anyone else from having her, but the Lover kills his partner to preserve them in that precious moment forever. The title "My Last Duchess" suggests that was his most recent Duchess and that he has had more before, and maybe killed them too. The Lover thinks that it's fine that he has killed Porphyria because: "God has not said a word!" It's almost as if he thinks it's righteous. The Duchess and Porphyria are both victims of strange and/or mad men. ...read more.