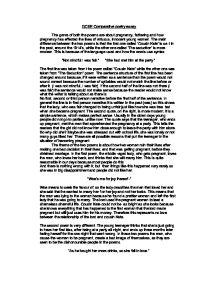 Comparing 'Cousin Kate' and 'The seduction', two poems about pregnancy.

GCSE Comparative poetry essay The genre of both the poems are about pregnancy, fathering and how pregnancy has effected the lives of virtuous, innocent young women. The main difference between the two poems is that the first one called 'Cousin Kate' is set in the past, around the 1914's, while the other one called 'The seduction' is more modern. This is because of the language used and how the words use syntax. "Not mindful I was fair." "She had met him at the party " The first line was taken from the poem called "Cousin Kate" while the other one was taken from "The Seduction" poem. The sentence structure of the first line has been changed around because, if it were written as a sentence than the poem would not sound correct because the number of syllables would not match the line before or after it. (I was not mindful, I was fair). If the second half of the line was not there (I was fair) the sentence would not make sense because the reader would not know what the writer is talking about as there is No first, second or third person narrative before the first half of the sentence. In general the line is in first person narrative it is written in the past (was) so this shows that the lady, who was fair changed to being unfair just like how she was treated when she became pregnant. The second quote, on the right, is more modern; it is a simple sentence, which makes perfect sense. ...read more.

The second line shows that there is a line shows that there is a river or a pond there, with the reflections of the man that made the girl pregnant. The word "scum" is not very formal and it is used to describe horrible, rude and dishonourable people like the man that got the teenager pregnant then left her. The voice of the poem called "Cousin Kate" is in second person narrative, this means that two people are talking to each other using "You", this is quite similar to "The Seduction" poem. Then near the end it changes to third person narrative, which means that they are using "I" instead of "You". In both the poems the two females who become pregnant are at very different ages and have had very different background lifestyles. "I was a cottage maiden" "Talked about school, in a disjointed way" The first line was taken from the poem called "Cousin Kate" and the second line was taken from the poem called "The Seduction". The first line, tells us that the woman, who attains pregnancy, did not have a very good education when she was younger, this is quite obvious because of the sort of job she has now, which does not have very good pay. The lady's family must have been quite poor because the woman did not achieve an education; this is maybe where the problem of the woman becoming pregnant starts in the first place. The line from "The Seduction" poem also tells us about the teenage girl that turns pregnant. ...read more.

The ninth stanza describes how the young pregnant teenager feels, about the situation she is in. The teenager feels regret, scared and sorry for herself. The second half of the poem, explains what she misses out on being a teenager and how she now has to turn into a woman quickly. The last stanza describes strategies in how she wants to kill herself she's saying that everybody hates her now and people are talking about her. "And better, now to turn away, move away, fade away" This evidence explains what the pregnant girl feels like doing, and tells us what she thinks of herself. 'Fade away' these two words basically mean to die, because nobody can fade away in reality almost like a metaphor. The girl thinks that it is better to 'fade away' than have people talking about you behind your back for the rest of your life. As the sentence goes on the ways in which she wants to be alone gets worse every time. Until it reaches 'fade away'. She wants to fade away 'now' because after she has her baby it may be too late. I conclude by saying that both the poems are different and similar to each other in their own ways, but one thing they both definitely have in common is, how they explain that pregnancy is a bad thing and how it can cause lots of problems. This is quite good because most people see pregnancy as a good thing and not many people see the bad points of it. ...read more.