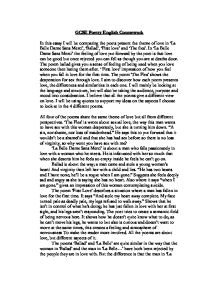 GCSE Poetry English Coursework In this essay I will be comparing the poets present the theme of love in 'La Belle Dame Sans Merci', 'Ballad', 'First love' and 'The flea'. In 'La Belle Dame Sans Merci' the feeling of love put forward by the poet is that love can be good but once rejected you can fell as though you are at deaths door. The poem ballad gives you a sense of feeling of being used when you love someone then hating them after. ' First love' impression of how you feel when you fall in love for the first time. The poem 'The Flea' shows the desperation for sex through love. I aim to discover how each poem presents love, the differences and similarities in each one. I will mainly be looking at the language and structure, but will also be taking the audience, purpose and mood into consideration. I believe that all the poems give a different view on love. I will be using quotes to support my ideas on the aspects I choose to look at in the 4 different poems. All four of the poems share the same theme of love but all from different perspectives. ...read more.

The poems 'Ballad' and 'La Belle' are quite similar in the way that the woman in 'Ballad' and the man in 'La Belle...' have both been rejected by the people they are in love with. But the difference is that the man in 'La Belle...' still loves the woman after she leaves him. But the woman in 'Ballad' hates the man for leaving her. Also in both these poems they are committing/thinking of committing suicide. In 'Ballad' she says, "Left me to want a bed of clay." Meaning she wants to die as her life has fallen to pieces. However in 'La Belle...' the man is just "loitering" and doing nothing, which is killing him slowly. Ballad and 'La Belle...' both have similar stanza lengths, syllabic counts and have around the same amount of stanzas these lengths/amounts have been chosen so the poems rhyme better and to make the poem easier for reading. However the poems 'The Flea' and 'First Love' have the same amount of stanzas and have a similar syllabic count. All the poems have a regular rhyming scheme some better than others. The two poems 'La Belle' and 'Ballad' are both written in the ballad form, they both tell a story. ...read more.

All 4 of the poems are similar in that they are all aimed at a similar age range. All the poems are about love but each a different aspect of it. I believe that 'La Belle...' delivers love in the most effective way. The idea of it being in a fairy tale has put forward quite a defined image of love. It shows the emptiness felt by the person who has given their heart away then been rejected very well. The choice of word helps to do this, where the writer uses the word "woebegone." This in one word says that he is so far gone that the empty feeling has pushed so far through him that there, is no return. My opinion on the way the poets present their views on the aspect of love they have chosen is good but 'La Belle' in my opinion is the best as I think the point gets across very quickly thoroughly and well, especially the idea of the story being told by and onlooker. The woman in 'La Belle...' says "I love thee true." At first I thought she was telling the truth and she did love him, but then four stanza's later she has left him when he awakes. Why would she say this? To draw him in and make him believe she loves him. By Antony Snodgrass ...read more.