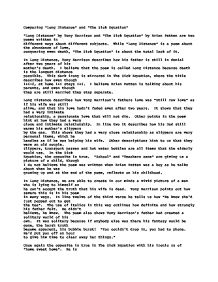 In line twelve of the third verse he tells us how "He knew she'd just popped out to get the tea". The use of italics in this way outlines how definite and how strongly his father felt. He didn't believe, he knew. The poem also shows Tony Harrison's father had created a solitary world of his own. It was solitary because if anybody else was there his fantasy would be gone, the harsh truth become apparent, his bubble burst! "You couldn't drop in, you had to phone. He'd put you off an hour to give him time to clear away her things." Once again the opposite is true in The Sick Equation with his ironic us of "home sweet home". He is throwing away love and keeping love away from him. He does not let himself fall in love as he believes that it would be like the horror and depression that his parents marriage is. "I never let love stay long enough to take root," means that he would never get emotionally attached to someone that he loved, in fear that it would turn out like his parents attempt. ...read more.

Tony Harrison's poem is written in the style of blank verse, containing rhyme in an ABAB form for the first three verses and ending with an ABBA formation to conclude his poem. Brian Patten on the other hand uses free verse, occasionally adding a rhyming couplet (but very rarely). The verses do not stick to any form whatsoever and neither do the length of the lines. He uses enjambment and personification, describing divorce as a bird (the albatross) giving imagery to love "taking root". He also has a reoccurring theme of flight, in that divorce was flying free and that he couldn't fly as souls (his parents) weighed him down. Tony Harrison also had a reoccurring theme in his poem. Telephone calls were often brought up in his poem, mainly at the end "and the disconnected number I still call" and also in the title. Both poems are written to get their message across. While Tony Harrison's message is that "life ends with death and that is all", Brian Patten realises that his thoughts on marriage were wrong (which he admits in the conclusion of his poem) and others shouldn't make the same mistake as he did. ...read more.