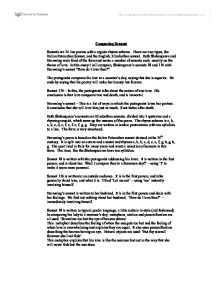 Comparing Sonnets Sonnets are 14 line poems with a regular rhyme scheme. There are two types, the Italian Petrarchan Sonnet, and the English, Elizabethan sonnet. Both Shakespeare and Browning were fond of the form and wrote a number of sonnets each, usually on the theme of love. In this essay I will compare, Shakespeare's sonnets 18 and 116 with Browning's sonnet "How do I love thee?" The protagonist compares his love to a summer's day, saying that she is superior. He ends by saying that his poetry will make her beauty last forever. Sonnet 116 - In this, the protagonist talks about the nature of true love. His conclusion is that love conquers time and death, and is immortal. Browning's sonnet - This is a list of ways in which the protagonist loves her partner. It concludes that she will love him just as much, if not better after death. ...read more.

It is in the first person, and talks generally about love, and what it is. Titled 'Let me not' - using 'me' instantly involving himself. Browning's sonnet is written to her husband. It is in the first person and deals with her feelings. We find out nothing about her husband. 'How do I love thee?' - immediately involving herself. Sonnet 18 is written in typical poetic language, a little archaic in style (old fashioned) In comparing his lady to a summer's day, metaphors, similes and personification are all used. 'Sometime too hot the eye of heaven shines' This metaphor describes the feeling of when the sun gets too hot and the feeling of when love is overwhelming and explains they are equal. It also uses personification describing the heaven having an eye. Natural objects are used: 'But thy eternall Sommer shall not fade' This metaphor explains that his love is like the summer but not in the way that she will never fade but the sun does. ...read more.

'That lookes on tempests and is never shaken' from sonnet 116, explaining love is something solid and never shaken which is similar to sonnet 116 'But they eternall Sommer shall not fade', explaining love will never fade. This is similar to Browning's explanation of love 'I shall love but thee better after death' - suggesting that she will even love her beloved better after death. They are conversely different in the way that they are written from 3 different viewpoints. Browning's was written in the 19th century, Shakespeare's in the 16th century. Browning's and sonnet 18 can be called love poems. Sonnet 116 is more of an argument about the nature of love: 'O no, it is an ever fixed marke' - debating that if you allow anyone to split you up it is not true love. All these poems are perfect examples of what a key necessity love is in life and I enjoyed an appreciated every poem. My preferred piece would be sonnet 18, because from his beautiful language and comparisons you can tell that it was written out of pure emotion and experience. ...read more.