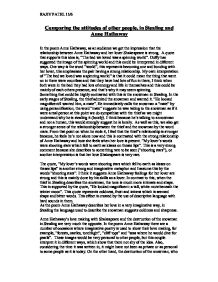 Comparing the attitudes of other people, in Stealing and Anne Hathaway.

Comparing the attitudes of other people, in Stealing and Anne Hathaway In the poem Anne Hathaway, as an audience we get the impression that the relationship between Anne Hathaway and her lover Shakespeare is strong. A quote that supports this idea is, "The bed we loved was a spinning world". Duffy has suggested the image of the spinning world and this could be interpreted in different ways. One way is the word "world", this represents becoming one and bonding with her lover, this emphasises the pair having a strong relationship. My own interpretation of "The bed we loved was a spinning world" is that it could mean the thing that went on in there were countless and that they have had lots of fun in there, I think when both were in the bed they had lots of energy and life in themselves and this could be mainly of each others presence, and that's why it may seem spinning. ...read more.

In contrast to this, when the thief in Stealing describes the snowman, the tone is much more intimate and shape. This is supported by the quote, "He looked magnificent: a tall, white mute beneath the winter moon". This quote represents coldness, frost and iciness which is seemed shape and bitter words. This effect is created by the use of descriptive language with hard sounds in them. As the poem Anne Hathaway describes her love in a very imaginative way, in Stealing the language used to describe the snowman suggests coldness and sharpness. Anne Hathaway's love making with Shakespeare and the destruction of the snowman in Stealing are very much the opposite. In the poem Anne Hathaway there are a number of occasions where imaginative poetry is used to show their love making, for example, "forests, castles, torchlight", "cliff tops" and "seas where he would dive for pearls". These images would be very personal to other people, but this couple interpret it in different ways, which show that there not shy of the idea. ...read more.

The best example of this is the snowman, he blatantly said, "Part of the thrill was knowing children would cry in the morning". It is because he is not recognized and known like other people, he steals. The short sentence that follows this quote, really shows the pain and frustration he going through not being recognized, "Life's tough". This also suggests that he not been recognized for a long time and it is because of this he may sometimes steal for the fun of it. Where as in Anne Hathaway it is very much the opposite, although they are recognized, they don't really care if their not, "spinning world" helps to support this it represents becoming one and bonding with her lover, this emphasises the pair having a strong relationship. I think the idea in Anne Hathaway, the couple are in their own world and don't really pay attention to the lives of others. We get this impression because most of the time, one of them talks a lot about how love is expressed through beauty and the skills of each other. RAJIV PATEL 11/6 ...read more.