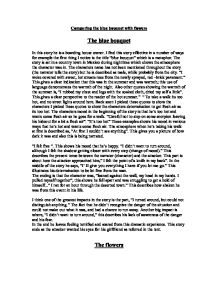 Comparing the blue bouquet with flowers.

Comparing the blue bouquet with flowers The blue bouquet In this story he is a boarding house owner. I find this story effective in a number of ways for example the first thing I notice is the title "blue bouquet" which is a metaphor. The story is set in a country town in Mexico during nighttime which shows the atmosphere the character was in. The characters name has not been mentioned throughout the story (the narrator tells the story) but he is described as male, while probably from the city. "I woke covered with sweet, hot stream rose from the newly sprayed, red -brick pavement." This gives a clear indication that this was in the summer and was warmth; this use of language demonstrates the warmth of the night. Also other quotes showing the warmth of the summer is, "I rubbed my chest and legs with the soaked cloth, dried my self a little". This gives a clear perspective to the reader of the hot summer." " To take a walk its too hot, and no street lights around here. ...read more.

In the middle of the story he says, "I' II give you everything I have if you let me go." This illustrates his determination to be let free from the man. The ending is that the character was, "leaned against the wall, my head in my hands. I pulled myself together", this shows he fell apart and was struggling to get a hold of himself..." I ran for an hour through the deserted town." This describes how shaken he was from this event in his life. I think one of the greatest impacts in the story is the part, "I turned around, but could not distinguish anything." The fact that he didn't recognize the danger of the situation and could not make out what it was, and had a chance to run away. Another big impact is where, "I didn't want to turn around," this describes his lack of awareness of the danger and his fear. In the end he leaves feeling terrified and scared from this dramatic experience. ...read more.

"Myop began to circle back to the house." This describes the mood of her wanting to go back from this unpleasant place. So far the story is about her going for a walk on her own meeting a stranger who was a dead man who had been lynched. I would say parts such as, "it was then she stepped smack in her eyes." This is dramatic as then she knocked sense into herself. "It was only when she saw his naked grin that she gave a little yelp of surprise." This is a great impact as this suggests her unawareness of the encounter and being surprised by this. After reading there two stories, "Blue Bouquet" and the "flowers" I would say the "Blue Bouquet is effective in appealing and interesting as the reader gives a clear message of danger ahead making it effective. Also both have the same structure of story as both go for a walk on their own, they have a disturbing encounter and at the end they both become disillusioned. ...read more.