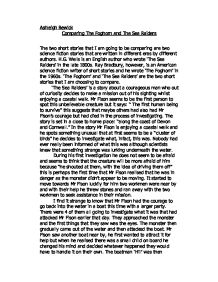 Comparing The Foghorn and The Sea Raiders

Ashleigh Bewick Comparing The Foghorn and The Sea Raiders The two short stories that I am going to be comparing are two science fiction stories that are written in different eras by different authors. H.G. Wells is an English author who wrote 'The Sea Raiders' in the late 1800s. Ray Bradbury, however, is an American science fiction writer of short stories and he wrote 'The Foghorn' in the 1960s. 'The Foghorn' and 'The Sea Raiders' are the two short stories that I am choosing to compare. 'The Sea Raiders' is a story about a courageous man who out of curiosity decides to make a mission out of his sighting whilst enjoying a coastal walk. Mr Fison seems to be the first person to spot this unbelievable creature but it says: " The first human being to survive" this suggests that maybe others had also had Mr Fison's courage but had died in the process of investigating. The story is set in a close to home place: "along the coast of Devon and Cornwall." In the story Mr Fison is enjoying a coastal walk and he spots something unusual that at first seems to be a "cluster of birds" he decides to investigate what, infact, this was. Nobody had ever really been informed of what this was although scientists knew that something strange was lurking underneath the water. During his first investigation he does not seem to be afraid and seems to think that the creature will be more afraid of him because "he shouted at them, with the idea of driving them off" this is perhaps the first time that Mr Fison realised that he was in danger as the monster didn't appear to be moving. It started to move towards Mr Fison luckily for him two workmen were near by and with their help he threw stones and ran away with the two workmen to seek assistance in their mission. ...read more.

It was like the monster and the lighthouse were having a conversation. It is very isolated: "a thousand miles out, and twenty miles deep." The creature in 'The Sea Raiders' was made up of: " seven rounded bodies distinct or connected" "And the rounded bodies were new and ghastly looking creatures in shape somewhat resembling an octopus, and with huge and very long and flexible tentacles, coiled copiously on the ground. The skin had a glistening texture, unpleasant to see, like shiny leather. The downward bend of the tentacle-surrounded mouth, the curious excrescence at the bend, the tentacles, and the large intelligent eyes, gave the creatures a grotesque suggestion of a face. They were the size of a fair sized swine about the body, and the tentacles seemed to him to be many feet in length. There were, he thinks, seven or eight at least of the creatures." The creatures are very evil in the fact that they kill Hill and try to attack the other humans. This could, in fact be because of the fact that these humans were trying to investigate the creatures. There are many more creatures in 'The Sea Raiders' with comparison to 'The Foghorn' and whereas the creature comes to the surface merely to find another of his sort. The creatures in 'The Sea Raiders' seem to be trying to stop humans finding out about them. The creatures in 'The Sea Raiders' seemed to be seen in more then one sighting but in 'The Foghorn' two people only saw it as far as we know. In 'The Foghorn' the creature acts dangerously towards the humans but doesn't realise it. It thinks that the lighthouse is another creature of its kind. It comes to the surface and for a little while it is carrying out what he seems to assume is a conversation of some sort. The humans then switch off the foghorn out of curiosity and the monster gets angry at it and crashes into it causing the lighthouse to fall. ...read more.

This implies that the creature is emotionally hurt it shows the feelings that it must have been having all year round. It has an upsetting ending because I feel that the creature deserves to be happy but is tormented by the fact it is the only one left. 'The Sea Raiders' ends in a different way. It is the author giving us facts about what has happened since Mr Fison's experience. He explains about the sighting in Calais. But I feel that the real story ended when Mr Fison realised that he couldn't help Hill and in this respect it is the same as 'The Foghorn' because Johnny couldn't help the creature. It ends by giving Mr Fison what he wants. To see the creatures up close, it is just a shame that in the process he sees the potential danger that they show to humans. My personal view is that 'The Foghorn' is a better story. I enjoyed reading it because it almost had a hidden message behind it. I don't think that the story was so much about the creature as I had first thought. It was more reflecting what McDunn was feeling inside. He felt lonely and when he was telling Johnny about his views on the creature I think he was trying to tell Johnny how he was feeling inside. I think that McDunn felt as lonely as the creature did. I also feel that Mcdunn wanted to be at one with this creature because it made him feel less cut off from the world. I think I prefer this story to 'The Sea Raiders' because that story is too formal and Mr Fison has a typical human instinct to investigate the creature and get as close as he could to the creature whereas Johnny and McDunn just viewed from a distance. I personally prefer 'The Foghorn' and I believe that Ray Bradbury wanted us to experience something different to the usual views that humans have about 'out of the ordinary' things. ...read more.