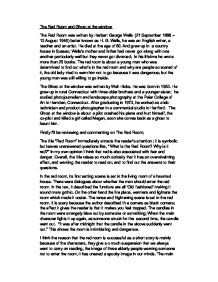 Comparing The Red Room and Ghost at the window

The Red Room and Ghost at the window The Red Room was written by Herbert George Wells (21 September 1866 - 13 August 1946) better known as H. G. Wells, he was an English writer, a teacher and an artist. He died at the age of 80. And grew up in a country house in Sussex; Wells's mother and father had never got along with one another particularly well but they never got divorced; In his lifetime he wrote more than 25 books. The red room is about a young man who was determined to find out what's in the red room and why are people so scared of it, the old lady tried to warn him not to go because it was dangerous; but the young man was still willing to go inside. The Ghost at the window was written by Walt Hicks. He was born in 1953. He grew up in rural Connecticut with three older brothers and a younger sister; he studied photojournalism and landscape photography at the Paier College of Art in Hamden, Connecticut. After graduating in 1973, he worked as a lab technician and product photographer in a commercial studio in Hartford. The Ghost at the window is about a pilot crashed his plane and hurt himself, the co-pilot and killed a girl called Megan, soon she comes back as a ghost to haunt him. ...read more.

The author did not give the characters name because he wants to create a mysterious scene. One of the old man is described as "His eyes were covered by a shade, and his lower lip, half averted, hung pale and pink from his decaying yellow teeth." This makes us creates an image of his as old and holding a single crutch as he stands up. The man with the withered arm always says "It's your own choosing." This showed him that he doesn't care about the young man going to the red room. The second man did not say a word; he only stared with his eyes fixed steadily on the burning fire. The young man in the story was quite brave because he was the only one who dared to enter the red room. And he conquered his fears at the very end. The old woman in the story was worried about the young man going to the room, she said "There are many things to see and sorrow for." The man with the withered arm tells what has happened in the red room. The language used in the story has lots of different effect. The writer keeps uses 'then' in the story this suggests that the breathless rush of what the narrator is doing. ...read more.

It is similar to a person dies and suddenly they becomes alive again. Many figurative language were been used in the story like "My heart turned to frozen palpitating slush." This quote is a metaphor which is suggesting that I am out of control and I'm scared. "My soul and sending icy shards stabbing up my spine." This quote is describing my feelings and also a metaphor; it is as if saying the character cannot control himself and stabbing his own spine. The writer is trying to build up the tension and suspense by using figurative language and putting the scenes in chronological order. It used dialogues to tell the story. The writer used the effect of putting one of the character's name at the very end, this creates a sense of creep and terror. In conclusion, I think the Red Room was the most effective in captivating the reader because it made you ask more and more questions after very chapter. It makes people thinks "What will happen next?" It is one of the best gothic stories I've ever read. I don't think the more traditional stories would have been more effective at the time when it was written because a traditional story is taught it is very well-known; so it wouldn't be fascinating because everyone knows what's going to happen next. ?? ?? ?? ?? ...read more.