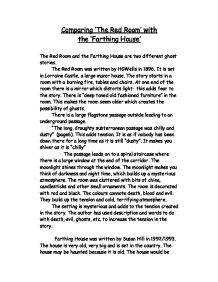 Comparing 'The Red Room' with the 'Farthing House'.

Comparing 'The Red Room' with the 'Farthing House' The Red Room and the Farthing House are two different ghost stories. The Red Room was written by HGWells in 1896. It is set in Lorraine Castle, a large manor house. The story starts in a room with a burning fire, tables and chairs. At one end of the room there is a mirror which distorts light- this adds fear to the story. There is "deep toned old fashioned furniture" in the room. This makes the room seem older which creates the possibility of ghosts. There is a large flagstone passage outside leading to an underground passage. "The long, draughty subterranean passage was chilly and dusty" (page6). This adds tension. It is as if nobody has been down there for a long time as it is still "dusty". It makes you shiver as it is "chilly" The passage leads on to a spiral staircase where there is a large window at the end of the corridor. The moonlight shines through the window. The moonlight makes you think of darkness and night time, which builds up a mysterious atmosphere. The room was cluttered with bits of china, candlesticks and other small ornaments. The room is decorated with red and black. The colours connote death, blood and evil. ...read more.

This makes the reader think that something mysterious is going to happen, but she doesn't say what and leaves the reader in suspense. It also makes the reader wonder why this night is so special. She sways her head from side to side while she speaks, which builds up tension. The characters in the Red Room are all frightening so they add to the ghostly atmosphere and build up tension. The storyteller is very confident. "It will take a very tangible ghost to frighten me." He is too full of himself and doesn't value the old people's advice. This adds to the tension because we wonder what is going to happen to him. How the characters look as well as what they say and do help to create suspense. There are a number of characters in the Farthing House- some of them are only mentioned briefly but it cuts out the idea of isolation involved in other ghost stories. The first character is the writer herself, she's a nervous woman who has mood swings and talks hectically but she is quite observant and describes things in great detail. Aunt Addy is an active woman for her age- she's still stuck in the olden days. She had been in isolation for many years but has now moved in to a community. ...read more.

This suggests that she isn't isolated. When she spoke to the matron in the morning, she lied. She said that she had slept well even though she hadn't which makes the readers wonder why. When the niece awoke in the night she could see what looked like a woman sobbing. She later realises that the woman is dead and her child had died- that was why she was crying. The reader then realises that everything fits together like a puzzle. The woman is a ghost! She was sad when she first came, she heard a child crying and she senses somebody in her room. All of these things create mystery and tension but in a sad, quiet way. "Terrible melancholy."(Page 27) The frightening events in the two stories are different- they show different feelings. In The Red Room there are feelings of shock and horror, where melancholy as in Farthing House there is a feeling of sadness and. In The Red Room there are six main settings of the scenes. One scene is in the living room. It's a cosy and calm gathering place, where people chat and gossip. The warm fire in the dark room builds up suspense. The passage is cold, dark, and narrow with a musty smell, to build up suspense and tension. There are no windows which makes a dark, eerie scene. ...read more.