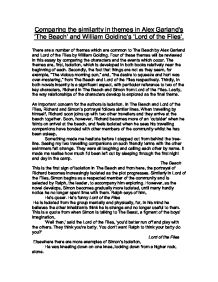 Comparing the similarity in themes in Alex Garland's 'The Beach' and William Golding's 'Lord of the Flies'.

Comparing the similarity in themes in Alex Garland's 'The Beach' and William Golding's 'Lord of the Flies'. There are a number of themes which are common to The Beach by Alex Garland and Lord of the Flies by William Golding. Four of these themes will be reviewed in this essay by comparing the characters and the events which occur. The themes are, first, isolation, which is developed in both books relatively near the beginning of each. Secondly, the fact that things are not as they seem, for example, "The vicious morning sun," and, "the desire to squeeze and hurt was over-mastering," from The Beach and Lord of the Flies respectively. Thirdly, in both novels insanity is a significant aspect, with particular reference to two of the key characters, Richard in The Beach and Simon from Lord of the Flies. Lastly, the way relationships of the characters develop is explored as the final theme. An important concern for the authors is isolation. In The Beach and Lord of the Flies, Richard and Simon's portrayal follows similar lines. When travelling by himself, Richard soon joins up with two other travellers and they arrive at the beach together. Soon, however, Richard becomes more of an 'outsider' when he faints on arrival at the beach, and feels isolated when he sees his travelling companions have bonded with other members of the community whilst he has been asleep, Something made me hesitate before I stepped out from behind the tree-line. ...read more.

Nobody don't know we're here. Your dad don't know, nobody don't know -' Lord of the Flies In The Beach too, the inhabitants are isolated from the, "real world," however this is by choice and the community do not like returning to the rest of the world, 'There's two main reasons people don't like doing the Rice Run. Number One, it's a complete hassle. Number two it means visiting the world.' 'The world?' 'The world. The world is everything outside the beach.' The Beach Secondly, a theme common to both novels is things not being what they seem. This is specifically done by both authors with use of imagery, visual deceptions, phrases and words with dark undertones, plot events and tragedies, such as the shark attack in The Beach. Firstly both novels feature much imagery such as, from Lord of the Flies, "The water shimmered like blood," and, from The Beach, "They burst apart in two red fountains, spraying like high pressure hoses, soaking me, blinding me, filling my mouth," These phrases are common throughout the novels, and are constant hints to the fact all is not as it seems. Most references have a dark edge to them, for example, The sun gazed down like an angry eye Lord of the Flies This phrase adds a disconcerting edge to the paragraph and keeps the reader on edge. ...read more.

In The Beach, the antagonism between Bugs and Richard is due to a mutual dislike for each other, Why did Bugs get on my nerves so much? Because he really did. I mean it wasn't like he'd done anything bad to me yet we both really didn't like each other. The Beach These relationships affect the community in many ways. Not only does it cause tension and arguments, but, it also adds another dimension to the novels. This similar dislike of characters in both novels, leads to another similarity between The Beach and Lord of the Flies, a rift in groups. In Lord of the Flies, an argument between Ralph and Jack sees Jack leaving to form his own tribe. This causes tension and splits the island. Similarly, this is shown in The Beach, with a rift forming over an argument. To sum up, both books, although written in different periods and by different authors have similar themes. The background they deal with is different, and yet in some respects the same. The main events in both books take place on an island. People fall out with each other, and, as demonstrated above, almost identical themes can be found running through both novels. The isolation of Richard and Simon, the insanity developed through Mister Duck and The Beast, the hints as to things not being as they seem, and the complex relationships which the inhabitants of the islands display, all feature in both novels. ...read more.

This essay has a good go at addressing the similarities and differences in two books about similar ideas. I would like to see evidence from the texts embedded in the writing and more specific language analysis at word, sentence and text level.
It may have been better to focus the essay on how one theme was presented in the two novels.