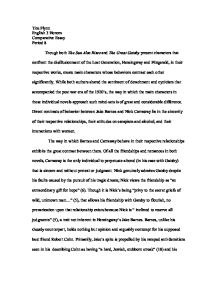 Comparing The Sun Also Rises and The Great Gatsby.

Tim Flynn English 3 Honors Comparative Essay Period 8 Though both The Sun Also Rises and The Great Gatsby present characters that confront the disillusionment of the Lost Generation, Hemingway and Fitzgerald, in their respective works, create main characters whose behaviors contrast each other significantly. While both authors shared the sentiment of detachment and cynicism that accompanied the post war era of the 1920's, the way in which the main characters in these individual novels approach such mind-sets is of great and considerable difference. Direct contrasts of behavior between Jake Barnes and Nick Carraway lie in the sincerity of their respective relationships, their attitudes on escapism and alcohol, and their interactions with women. The way in which Barnes and Carraway behave in their respective relationships exhibits the great contrast between them. Of all the friendships and romances in both novels, Carraway is the only individual to perpetuate a bond (in his case with Gatsby) that is sincere and without pretext or judgment. Nick genuinely admires Gatsby despite his faults caused by the pursuit of his tragic dream; Nick views the friendship as "an extraordinary gift for hope" (6). Though it is Nick's being "privy to the secret griefs of wild, unknown men..." (5), that allows his friendship with Gatsby to flourish, no prevarication upon that relationship exists because Nick is " inclined to reserve all judgments" (5), a trait not inherent in Hemingway's Jake Barnes. ...read more.

Though Jake truly does find friendship in the company of Bill, his confiding that he had loved Brett "Off and on for a hell of a long time." (128), is tainted because it comes only under the influence of alcohol. Though Jake makes many inward "intimate revelations" (6) yet he does not have the "aficion" (152) Carraway has for maintaining character and value in friendship. In addition to each character's interactions in relationships, great contrast between both Nick and Jake is exhibited in their attitudes toward and engagements in alcoholic consumption. In the microcosm that Jake and his acquaintances live in, drinking is the prevailing destructive and escapist activity. Jake's dinner with Brett at the novel's end exhibits this as Jake orders and consumes three bottles of wine by himself and then proceeds to order two more; when Brett asks Jake not to get drunk he replies "How do you know?" (250) Jake drinks to alleviate the pain caused by his impotence and subsequent inability to consummate his relationship with Brett. Drinking compounds Jake's dire sentiment, but unlike him, Carraway experiences disillusion through drinking vicariously in the acts his acquaintances. Admitting that he has "been drunk just twice in my [his] life" (33), Nick's experiences with alcohol are less visceral but still important. When carousing with Tom, his mistress (Myrtle) and their friends, Nick speaks of "the bottle of whiskey - a second one-" as being "in constant demand by all present..." ...read more.

In reference to Brett's desire to sleep with Pedro Romero, Jake urges and pleads, "Don't do it...You don't have to do that " (187), yet acquiesces and agrees to set the two up. Though Jake acknowledges the hell that is his relation ship with Brett, he can't escape it. "Women made such swell friends. Awfully swell. In the first place, you had to be in love with a woman to have a basis of friendship...I had been having Brett as a friend....I had been getting something for nothihng. That only delayed the presentation of the bill. The bill always came."(152) Jakes relationship with Brett is nothing but perpetual torture because though he provides the emotional support she seeks, he can not meet her desire for a physical element in their relationship and therefore must suffer as she finds it in various other men. Where as Nick finds pain in the destruction of Gatsby by a woman, Jake finds pain in his personal ruin by a woman. Both The Great Gatsby and The Sun Also Rises address the post war frustration experienced by those of the Lost Generation, but do so through developing two very different main characters. Though the afore mentioned works do share similar themes and concepts, those ideas are delivered through very different styles and points of view that have resulted in two very different main characters. In contrasting Nick Carraway and Jake Barnes' stock in relationships, sentiments toward alcohol, and affects from women, a clear distinction between the behaviors of each character is made. ...read more.