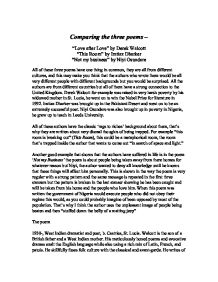 Comparing the three poems - "Love after Love" by Derek Walcott "This Room" by Imtiaz Dharker "Not my business" by Niyi Osundare All of these three poems have one thing in common, they are all from different cultures, and this may make you think that the authors who wrote them would be all very different people with different backgrounds but you would be surprised. All the authors are from different countries but all of them have a strong connection to the United Kingdom. Derek Walcott for example was raised in very harsh poverty by his widowed mother in St. Lucia, he went on to win the Nobel Prize for literature in 1992. Imtiaz Dharker was brought up in the Pakistani Desert and went on to be an extremely successful poet. ...read more.

being taken away from there homes for whatever reason but Niyi, the author wanted to deny all knowledge until he knows that these things will affect him personally. This is shown in the way the poem is very regular with a strong pattern and the same message is repeated in the first three stanzers but the pattern is broken in the last stanser showing he has been caught and will be taken from his home and the people who love him. When this poem was written the government of Nigeria would execute people who did not obey their regime this would, as you could probably imagine of been opposed by most of the population. That's why I think the author uses the unpleasant image of people being beaten and then "stuffed down the belly of a waiting jeep" The poem 1930-, West Indian dramatist and poet, b. ...read more.

Often focusing on West Indian folk traditions. Walcott, who lives in the United States and Trinidad, was awarded the Nobel Prize for Literature in 1992. Derek Walcott was born in St. Lucia, West Indies, in 1930, to an English father and African mother. He is the author of more than twenty collections of poems and plays, including Omeros, The Arkansas Testament , and The Bounty . He received the Nobel Prize in Literature in 1992. As Rebekah Presson noted in the introduction to an interview, "Walcott's plays and poems are distinguished by the tensions between the European and African/Caribbean cultures, and by the resolution of those tensions. In play after play, poem after poem -- and especially in his recent epic poem Omeros. -- Walcott explores the burden of cultural pasts (Omeros is itself Walcott's Caribbean Odyssey), and how those pasts contend within his heroic, if all-too-human, characters." ...read more.