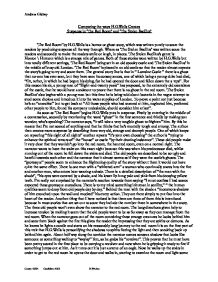 Comparing the ways H.G.Wells Creates Suspense in 'The Red Room' and 'The Stolen Bacillus'.

Comparing the ways H.G.Wells Creates Suspense in 'The Red Room' and 'The Stolen Bacillus' 'The Red Room' by H.G.Wells is a horror or ghost story, which was written purely to scare the readers by producing suspense all the way through. Where as 'The Stolen Bacillus' was written scare the readers and secondly to make the readers smile or laugh, in places. 'The Stolen Bacillus's genre is Horror \ Humour which is a strange mix of genres. Both of these stories were written by H.G.Wells but into totally different settings, 'The Red Room' being set in an old spooky castle and 'The Stolen Bacillus' in the middle of busy old London. 'The Red Room' is placed in an old castle so that the reader almost expects the story's going to try and scare them. The general story line is that in " Lorraine Castle " there is a ghost that no-one has ever seen, but they have seen its consequences, one of which being a young duke had died, "Or, rather, in which he had begun his dying, for he had opened the door and fallen down the steps". For this reason his air, a young man of "Eight-and-twenty years" has proposed, to the extremely old caretakers of the castle, that he would have a stakeout to prove that there is no ghost in the red room. 'The Stolen Bacillus' also begins with a young man but this time he is being told about bacteria in the vague attempt to steal some cholera and introduce it into the water supplies of London. To prove a point not just because he's an "anarchist" but to get back at "All those people who had sneered at him, neglected him, preferred other people to him, found his company undesirable, should consider him at last". ...read more.

This instantly tells the reader that he is going to try and do something not quite right with it once he has stolen it. It is obvious that the visitor is going to steal it because it says so in the title, 'The Stolen Bacillus'. The visitor asks in a very sneaky manor whether the sample under the microscope, through which he was previously looking at them, whether these were "alive?" and "Are they dangerous now?" The bacteriologist says that the samples under the microscope were only killed and stained bacteria and that he wished that he could do that to all the cholera "in the universe". After which the visitor asks the bacteriologist if he would have any about in "the active state", Knowing full well that he did he just didn't know where they were. The visitor isn't very skilled at the art of deception and keeps giving away his plan to the reader yet the bacteriologist just doesn't see what he is going to do. H.G.Wells is creating suspense all the time by letting the reader in on the future story line. Of course not being a very cautious man the bacteriologist shows him a test tube full of the disease, which sets the visitor "devouring" with his "eyes". The visitor, who is obviously intrigued with the test tube, is staring at it so the bacteriologist decides to show off with his knowledge of the stuff. "Only break such a little tube as this into a supply of drinking water, say to these minute particles of life that one must needs stain and examine with the highest powers of the microscope even to see, and that one can neither smell nor taste - say to ...read more.

And he ran away with it to poison the water of London, and he certainly might have made things look blue for this civilised city. And now he has swallowed it. Of course, I cannot say what will happen, but you know it turned that kitten blue, and the three puppies - in patches, and the sparrow - bright blue. But the bother is, I shall have all the trouble and expense of preparing some more." This reduces the tension dramatically because it brings a smile to the reader's face and in some cases makes them laugh. This story in my opinion is most peculiar because in places it talks about death and destruction and so makes the reader think that because it is using words that could lead to a horrendous ending, the things that were mentioned will happen. And then at the end it turns out to be a false alarm that makes the reader laugh. In comparison both stories have peculiar endings 'The Red Room' leaves the reader wondering and flicking between two sides of the story and 'The Stolen Bacillus' having a humorous ending that doesn't really fit in with the rest of the story. Both the stories have fluctuations in the suspense and tension in them they go up gradually at the beginning, then flatten out a bit, then a really sharp rise with the end of the stories curving down to the state of mind that you were in before you opened the book. Andrew Gidney Centre 18301 Candidate: 4053 Comparing the ways H.G.Wells Creates Suspense in 'The Red Room' and 'The Stolen Bacillus' ...read more.