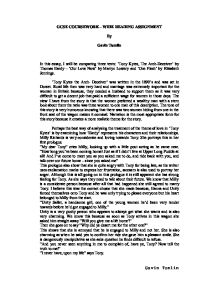 Comparing three texts - 'Tony Kytes, The Arch-Deceiver' by Thomas Hardy - 'Our Love Now' by Martyn Lowery and 'One Flesh' by Elizabeth Jennings.

GCSE COURSEWORK - WIDE READING ASSIGNMENT By Gavin Tomlin In this essay, I will be comparing three texts: 'Tony Kytes, The Arch-Deceiver' by Thomas Hardy - 'Our Love Now' by Martyn Lowery and 'One Flesh' by Elizabeth Jennings. 'Tony Kytes the Arch- Deceiver' was written in the 1890's and was set in Dorset. Rural life then was very hard and marriage was extremely important for the woman in Britain because, they needed a husband to support them as it was very difficult to get a decent job that paid a sufficient wage for women in those days. The view I have from the story is that the women preferred a wealthy man with a stern look about them the ratio was three women to one man of this description. The tone of this story is very humorous knowing that there was two women hiding from one in the front seat of the wagon makes it comical. Narration is the most appropriate form for this story because it creates a more realistic theme for the story. Perhaps the best way of analysing the treatment of the theme of love in 'Tony Kytes' is by examining how 'Hardy' represents his characters and their relationships. ...read more.

Her father then comes to persuade her to refuse him. Tony Kytes face was described as 'twas a little, round, firm, tight face, with a seam here and there left by smallpox.' He was a serious looking character. Tony is too much of a gentleman he found it difficult to refuse woman and will do anything to make them happy. Saying this he was indeed manipulative spinning each woman a tale in order to spend time with the other. He was not aware of what he wanted until destiny set his path. Mr Kyte's knew that the perfect girl for Tony (his son) was one that did not seek anything from him because this one did not set out to manipulate Tony like the others she was genuine. The narrator of 'Tony Kytes' is a cart driver who tells the story to someone who is returning to a local village after a 35 year absence. The reader is therefore placed in the position of the carts passenger. The story becomes funny rather than sad because the narrator had no involvement in the situation. Not being told about the wedding in detail makes the reader imagine how the wedding was and what went on. ...read more.

They differ as in the end Tony Kytes finds his true love but in 'Our Love Now' and 'One Flesh' the love is forever dead. As Tony Kytes is told by a narrator who is not involved in the story it becomes comical whereas 'One Flesh' is told by the narrator who is directly involved and this makes the poem more real and have a sombre mood. Then with 'Our Love Now' which has a tense a regretful mood as this is a conversation between two individuals. The love in Tony Kytes is young love and is just beginning and I would not call what Tony did love but pure lust. In 'Our Love Now' and 'One Flesh' the love was a mature one but has come to an end, this is perhaps why it is sad. The idea being portrayed about love is that it is very painful and this is demonstrated in all of the three passages. I conclude that 'Our Love Now' was my favourite text as it used metaphors, alliteration and pacifying speech which I found particularly enjoyable because it stretched my imagination. I believe that the only true love shown in these passages comes from the love shown in 'One Flesh' not from the parent but from the narrator (the child) towards her parents. Gavin Tomlin ...read more.