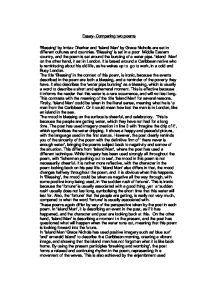 Essay- Comparing two poems 'Blessing' by Imtiaz Dharker and 'Island Man' by Grace Nicholls are set in different cultures and countries. 'Blessing' is set in a poor Middle Eastern country, and the poem is set around the bursting of a water pipe. 'Island Man' on the other hand, it set in London. It is based around a Caribbean native who is reminiscing about his old life, as he wakes up to go to work, in a cold and Busy London. The title 'Blessing' in the context of this poem, is ironic, because the events described in the poem are both a blessing, and a reminder of the poverty they have. It also describes the 'water pipe bursting' as a blessing, which is usually a word to describe a short and ephemeral moment. This is effective because it informs the reader that this water is a rare occurrence, and will not last long. This contrasts with the meaning of the title 'Island Man' for several reasons. Firstly, 'Island Man' could be taken in the literal sense, meaning what he is 'a man from the Caribbean'. ...read more.

In 'Blessing', the mood could be taken as negative all the way through, with some positive irony being used, in 'the sudden rush of fortune'. This is ironic because the 'fortune' is usually associated with a good thing, yet a 'sudden rush' usually does not last long, symbolising the short time that this water will last for. Also, the 'fortune' that the people are getting, is really not very much, compared to what the word 'fortune' is usually associated with. These poems again differ by way of the perspective taken by the poet in each poem. In 'Island Man', it is describing an event in the past, as if it has happened, and the character and poet are looking back at this. On the other hand, 'Island Man' is describing a moment in the present, and the poet has questioned what will happen when the water runs out, meaning that this poem is looking forward into the future. In 'Island Man 'Grace Nichols has used positive imagery such as' blue surf 'and' emerald Island' to describe the Caribbean morning, creating a vibrant image, and showing that the island man has not forgotten what it is like back home. ...read more.

The rhythm runs fast in stanza three, which relates to the flowing of the water, and the people running to get some in panic. 'Blessing' also has religious connotations, in the title, and lines eleven twelve, with 'roar of tongues' and 'congregation'. This creates religious imagery, and also implies that the bursting of this pipe is perhaps 'a gift from god'. The verse form in both of these poems relates in some way or another to water flowing or dripping. In 'Island Man', the way the lines are structured is similar to the building up and crashing down of waves. In 'Blessing', having the stanzas get longer and then with a shorter one at the end symbolises the build up to the bursting of the pipe, and then the short lived flow of water. Both of these poems have strong effects on the reader. 'Blessing' creates a sympathetic feeling towards the people, who the pipe has burst for. 'Island Man', encourages the reader to imagine what it is like for the man stuck working in London, by creating several distinct images of both the Caribbean and London, making it easier to distinguish and identify the differences between both, and how the man must be feeling. Amy Barton. ...read more.