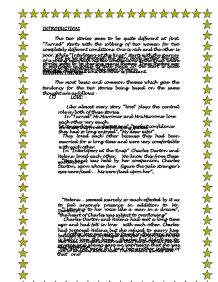 INTRODUCTION: The two stories seem to be quite different at first. "Turned" starts with the sobbing of two women for two completely different conditions. One is rich and the other is poor. While "Interlopers at the Knap" starts with the journey of a young man with his two companions to the Knap where a marriage is going to take place. So the start is quite opposite. One is sad and the other is pleasant. But as we go through the story more further the two stories seem to be sharing many themes. These themes are going to be explored in this essay of mine. COMMON THEMES: The most basic and common themes which give the tendency for the two stories being based on the same thought are as follows: - (I) LOVE: - Like almost every story "love" plays the central role in both of these stories. In "Turned" Mr.Marroner and Mrs.Marroner love each other very much. We know this from the following quotes:- "A longer love ... a deeper one", "perfect confidence they had so long enjoyed", "My dear wife!" They loved each other because they had been married for a long time and were very comfortable with each other. In "Interlopers at the Knap" Charles Darton and Helena loved each other. We know this from these quotations: - "Her hand was held by her companion, Charles Darton, upon whose fine figure the pale stranger's eyes were fixed ... ...read more.

(III) FRIENDSHIP: - In both of the stories the theme of friendship is also common. In "Turned" Mr.Marroner and Mrs.Marroner are friends. We know this from the following quotes: - "Joked his wife about her laborious efforts to educate child", "he wrote long, loving, frequent letters", "deeply regretting his delay", "perfect confidence which they had so long enjoyed" They were married for a long time. They loved each other very much and were good friends also. In "Interlopers at the Knap" Charles Darton and Japheth Johns were very good friends and did the business together. The evidence for this is:- "The farmer's friend", "I am going to see your relations as they always seem to me" They were good friends and shared every secret with one another. (IV) POWER AND WEALTH: - In both of the stories the main male character has got a lot of power and wealth. He thinks that with his power and wealth he can use every powerless and poor woman for his own advantage and wants. In "Turned" Mr.Marroner is very wealthy and therefore very powerful. Gerta is powerless and poor. So he thinks that Gerta is his occupy and he can do whatever he wants with her. That's why he makes Gerta pregnant for his happiness and joy. He destroys the life of an innocent and helpless girl because of her poorness. And raps her of the best joys of her life for his pleasure for just a moment. ...read more.

--- I would have done it once, but now I never can" When Darton marries Helena instead of Sally, her heart is broken. But when Helena dies, Darton proposes Sally again. This hurts her feminism. She thinks that he considers her a little toy, which has no thoughts of its own and no emotions. With which he can play whenever he wants and throw it away when he finds another of his own heart. So thinking like a woman she decides that she will never marry a man who only wants to marry you and doesn't love you. CONCLUSION: Both the writers try to pass the same massage that women always trust men but they deceive them. This is a usual thought that women always require men's support and they can't live without them. These two stories were written in the 19th century. So they wholly enlighten the women's deprival by men in the society with no equal rights at that time. The writers also try to convey the message that men always think that they are dominants in all the aspects and that the women are weak creatures who can never live without them. The men have got complete control over women's lives and they can do whatever they want to, with them. At the end of the stories we find a conclusion that women can run their own lives independently. They can do what they want and not tolerate the unrespectfull behaviour of men any more. That's what Mrs.Marroner and Sally do. 1 ...read more.