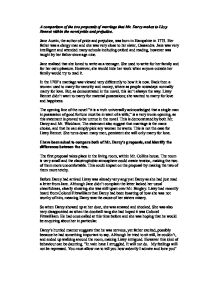 Comparision of the proposals in Pride and Prejudce

A comparison of the two proposals of marriage that Mr. Darcy makes to Lizzy Bennet within the novel pride and prejudice. Jane Austin, the author of pride and prejudice, was born in Hampshire in 1775. Her father was a clergy man and she was very close to her sister, Cassandra. Jane was very intelligent and attended many schools including oxford and reading, however was taught by her father since age nine. Jane realised that she loved to write as a teenager. She used to write for her family and for her own pleasure. However, she would hide her work when anyone outside her family would try to read it. In the 1700's marriage was viewed very differently to how it is now. Back then a women used to marry for security and money, where as people nowadays normally marry for love. But, as demonstrated in the novel, this isn't always the way. Lizzy Bennet didn't want to marry for material possessions; she wanted to marry for love and happiness. The opening line of the novel "it is a truth universally acknowledged that a single man in possession of good fortune must be in want of a wife," is a very ironic opening, as this statement is proved to be untrue in the novel. ...read more.

This only makes Darcy angrier however he comes over sarcastic and cocky, for he knows the truth behind Wickham's mask, and is confident this is not the something she can use against him. He goes on to accuse Lizzy of being proud. He accuses her of being upset that he has hurt her pride, that she is only creating arguments against him because she is desperate. However he is only doing this because he doesn't know how to treat her. The proposal takes another turn for the worse when Darcy starts insulting her family - again! He says Lizzy and her family are beneath him, only building more tension, leading to a disastrous ending. Lizzy finally loses control! She begins to accuse Darcy of being un-gentlemanly, which to him was a very big insult, and she sees him start at this. She goes on to say "You could not have made me the offer of your hand in any possible way that would have tempted me to accept it," telling Darcy, no matter what she would never marry Darcy! She also tells him, even if he were the last man on earth she could not marry him, and that she has felt this way after only one month of knowing him. ...read more.

When she met him she thought he was a pompous, and that if he was the last man on earth she wouldn't marry him. But now she is accepting his proposal. She has also been shown first impressions don't count. Not only did she misjudge Darcy, she misjudged Wickham too. Both Lizzy and Darcy have changed because of what the other said in the first proposal. They have been shown the errors of their ways and now, done what they can to put things right. The title of the novel "Pride and Prejudice" fits in nicely with the two characters and their experiences. Pride refers to Darcy and his arrogance, how she is too quick at judging people. It could also be showing them as a couple, as in Pride and Prejudice together, make an item. Jane Austen's Pride and Prejudice is a timeless classic. It was a best seller when it was first published in the 1700's and still is today, 300 years later. It isn't just the classic love story; however it makes everyone's heart jump a beat! Many other novels by Jane Austen have become well loved, even today. Many of Jane's books have also been made in films, with big stars like Kiera Knightly and Colin Firth. The books have also been adapted by other Jane Austen is a brilliant novelist, with many classics, that I'm sure will be beloved for many years from now. ...read more.