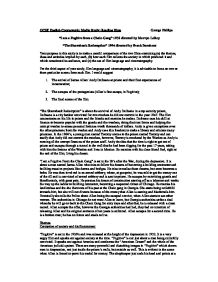 Comparison betweeen &quot;I am a Fugitive from a Chain Gang&quot; and &quot;The Shawshank Redemption&quot;

GCSE English Coursework: Media Study: Reading films George Phillips "I am a Fugitive from a Chain Gang" 1932 directed by Mervyn LeRoy "The Shawshank Redemption" 1994 directed by Frank Darabont Your purpose in this study is to make a careful comparison of the two films examining (a) the themes, ideas and attitudes implied by each, (b) how each film reflects the society in which produced it and which constituted its audience, and (c) the use of film language and cinematography. For the third aspect of your study, film language and cinematography, it is advisable to focus on two or three particular scenes from each film. I would suggest 1. The arrival of James Allen/ Andy Dufresne at prison and their first experiences of incarceration; 2. The escapes of the protagonists (Allen's first escape, in Fugitive); 3. The final scenes of the film. "The Shawshank Redemption" is about the survival of Andy Dufresne in a top security prison, Dufresne is a city banker convicted for two murders he did not commit in the year 1947. The film concentrates on his life in prison and the friends and enemies he makes. Dufresne uses his skill at finance to become popular with the guards and the wardens, doing their tax forms and helping the corrupt warden to amass personal fortunes worth thousands of dollars. Andy is given exceptions over the other prisoners from the warden and Andy uses this freedom to make a library and educate many prisoners. In the 1960's, a young man named Tommy comes to the prison named Tommy and can testify that Andy did not commit the murders, however, Tommy is murdered by the Warden as Andy is running all the corrupt finances of the prison staff. Andy decides that the time is right to get out of prison and escapes through a tunnel in the wall that he had been digging for the past 17 years, taking with him the fortune of the Warden and lives in Mexico. ...read more.

They can appreciate that Andy is different, coming from a different background to them. Yet Andy never seems to look down on them, despite him being so much more educated then them all. Their liking of Andy is due to Red. Red, although not very educated in terms of how his schooling, is very sharp witted and is a good judge of character and people's motives for their actions. This is evident, where Andy negotiated a deal with Hadley where Andy would use his banking skills to help Hadley protect the $35'000 that he inherited, Andy in return wanted three beers apiece for each of his "co workers", when they were tarring the roof of a building. Red comments on why Andy did the deal with Hadley. "You could argue that he did it to curry favour with the guards. Or maybe make a few friends amongst us cons. Me, I think he did it just to feel normal again." This opinion is well backed-up, as we see Andy just sitting in the sun, smiling to himself, even when he is offered a beer by Heywood, he declines, saying that he does not drink alcohol, and continues smiling to himself, watching the other convicts drink "his" beer. This is not the only act of kindness Andy shows towards his fellow convicts, Andy tries to improve the prisoners' education by improving the library, he writes one letter a week and after doing this for six weeks, he finally gets a letter back and cheque for two hundred dollars and many more books. In the books given, there is a 12" vinyl of Mozart. He plays this through the intercom, so that all the prisoners can hear it. Andy's intentions were to "remind everyone that there was something that prison can't take away from you-hope." His intentions clearly did affect both prisoners and guards alike, for a short while, every single prisoner and guard stood still, listening, and so he did achieve his goal: to remind people of good things in life, and it worked. ...read more.

When Allen has achieved as a building contractor, there is a constant 30's Jazz, it is unclear whether this is diegetic or not, because it has no relevance on what is happening in the film at that moment. Metallic "bangings" of prison doors are exaggerated, to reinforce the harsh reality of being incarcerated and synthesised sounds are used to great suspense or menace, this is evident in the opening scenes where synthesised sounds are played over "If I didn't care." As well as that kind of harsh sound, sad sounds are used well to create pathos. The slow violins play with lots of vibrato, which makes the piece more expressive. The music sympathises with the prisoners. There are several key scenes where music is used to great effect, one is when the camera is pans over the whole prison and we see the prisoners scuttle like ants to assess the new convicts for betting purposes, or simply just to torment the new ones, the music is that of violins and piano, interestingly in this scene, the only other object to make a noise is Shawshank's flag that rustles greatly. This scene represents the way that the prisoners are like ants and have no power, the rustling of the flag could represent the way that Shawshanks power or corrupted power and evil controls every aspect of all of them. The other powerful scene is where Andy plays Mozart's "The marriage of Figaro," over the prisons intercom. Despite the cons not knowing what the two Italian ladies were singing about, the beauty of music liberates them from the morally degrading spirit of Shawshank. The Warden is an intelligent man and knows full well what the motives behind Andy's actions were. He orders Andy to turn the music down, but Andy in defiance or resilience turns it up. The camera pans across all the prisoners who are transfixed and stunned almost by the beauty and humanity of the music. The scenes of the prisoners fade slowly into the next, which creates calmness and strengthens the ongoing them of humanity and freedom. ...read more.