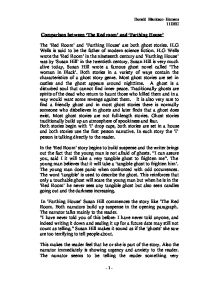 Comparison between 'The Red room' and 'Farthing House' The 'Red Room' and 'Farthing House' are both ghost stories. H.G Wells is said to be the father of modern science fiction. H.G Wells wrote the 'Red Room' in the nineteenth century and 'Farthing House' was by 'Susan Hill' in the twentieth century. Susan Hill is very much alive today, Susan Hill wrote a famous ghost novel called 'The woman in Black'. Both stories in a variety of ways contain the characteristics of a ghost story genre. Most ghost stories are set in castles and the ghost appears around nighttime. A ghost is a disturbed soul that cannot find inner peace. Traditionally ghosts are spirits of the dead who return to haunt those who killed them and in a way would want some revenge against them. It is also very rare to find a friendly ghost and in most ghost stories there is normally someone who disbelieves in ghosts and later finds that a ghost does exist. Most ghost stories are not full-length stories. Ghost stories traditionally build up an atmosphere of spookiness and fear. Both stories begin with 'I' drop caps, both stories are set in a house and both stories use the first person narrative. In each story the 'I' person is talking directly to the reader. In the 'Red Room' story begins to build suspense and the writer brings out the fact that the young man is not afraid of ghosts. ...read more.

I started to feel scared when all the candles started blowing out. This description is often written in a spine-chilling style and presents the reader shivers. "It was after midnight that the candle in the alcove suddenly went out, and the black shadow sprang back to its place there." Another quote where the young man feels the presence of a ghost is "As I stood undecided, an invisible hand seemed to sweep out the two candles on the table." In the Farthing House the shadow imagery i.e also used to the reader and this fits in very much with the ghost story genre. "Oh for an instant that feeling of unease and melancholy passed over me like a shadow. It is as if the ghost transfers its sadness to the narrator. H.G Wells increases the fear of the narrator. The longer he stays in the 'Red Room'. The young man is panicking in complete terror. "I leapt panting and disheveled from candle to candle in a vain struggle against that remorseless advance." The ghost is suggested through the way the way candles keep going out. It is as if the ghost hand is taking the lights out. The ghost seems to be laughing at the young man. And in the 'Farthing House' the narrator Susan Hill creates fear "I sensed some thing sinister, that I was shrouded at once in the atmosphere of a haunted house". H.G Wells uses the cold imagery linked to ghost "I shut them and walked down the chilly, echoing passage". ...read more.

The woman in the 'Farthing House' was put in a very calm setting. The 'Farthing House' had 'framed photographs on a sideboard, flowers in jugs bowls.' 'Farthing house was run, warm and comfortable, and there was good, home-cooked dinner.' As you can see it is a contrast to the 'Red Room'. I prefer 'The Red Room' because it was a full story because it explains why the things happened in the first place. In the closing stages the man in 'The Red Room' manages badly the supposed ghost and so was mentally and physically broken down as a result of the intense darkness, his belief in that ghost do not exist. But the woman coped. She felt sorry for the ghost. She wanted to understand the ghost sorrows. In 'Farthing House' all the characters are women; Aunt Addy, Mrs. Flowers and the ghost woman. The ghost whom the women met was not aggressive. She was grieving. The ending of the 'The Red Room' was a surprise to me because the next morning the young man said to the old people that the real ghost in the 'Red Room' was his own fear and it was his own fear and fear of darkness that terrorized him. He was saying that he still didn't convince me. I thought he was coming out with this because he wasn't brave enough to admit the truth that he had been in the presence of a ghost. The ending is a bit a mystery. It's ambiguity. Both were very unusual ghost stories in my view. Donald Blankson- Hemans 11DEH - 1 - ...read more.