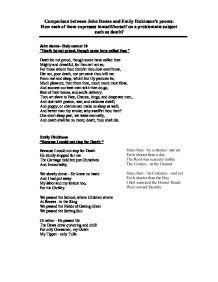 Comparison between John Donne and Emily Dickinson's poems: How each of them expresses himself/herself on a problematic subject such as death?

Comparison between John Donne and Emily Dickinson's poems: How each of them expresses himself/herself on a problematic subject such as death? John donne- Holy sonnet 10 "Death be not proud, though some have called thee" Death be not proud, though some have called thee Mighty and dreadful, for thou art not so; For those whom thou think'st thou dost overthrow, Die not, poor death, nor yet canst thou kill me. From rest and sleep, which but thy pictures be, Much pleasure, then from thee, much more must flow, And soonest our best men with thee do go, Rest of their bones, and soul's delivery. Thou art slave to Fate, Chance, kings, and desperate men, And dost with poison, war, and sickness dwell, And poppy, or charms can make us sleep as well, And better than thy stroke; why swell'st thou then? One short sleep past, we wake eternally, And death shall be no more; death, thou shalt die. Emily Dickinson "Because I could not stop for Death " Because I could not stop for Death He kindly stopped for me The Carriage held but just Ourselves And Immortality. We slowly drove - He knew no haste And I had put away My labor and my leisure too, For his Civility. We passed the School, where Children strove At Recess - in the Ring We passed the Fields of Gazing Grain We passed the Setting Sun Or rather - He passed Us The Dews drew quivering and chill For only Gossamer, my Gown My Tippet - only Tulle Brief biography of John donne John Donne was an English poet who was born in 1572 in London. ...read more.

Although we tell Death it does not control what our destiny is, we still recognize that eventually all of us will get there one way or another at stated in lines 7-8, "And soonest our best men with thee do go, rest of their bones, and soul's delivery". Donne also states that Death is, as we, a "slave to Fate, Chance, kings, and desperate men" which expresses his view that Death has no more power over us that these. This is due to the fact that Death cannot collect our souls unless these people act to cause our demise. Donne portrays Death as a scavenger who "dost with poison, war, and sickness dwell" (10) because, it is implied, Death must wait these to act before it may do its deed. Donne then criticizes Death even more, when he says, "And poppy, or charms can make us sleep as well, and better than thy stroke; why swell'st thou then?" (11-12). This is a continuation of the comparison between Death and sleep, where Donne means that there are other ways to bring about a sleep state, some of which are more potent than Death's stroke. He explains this statement when he says that Death is "One short sleep past, we wake eternally" (13) which is to say that sleep of Death is short lived in comparison to that of an opium sleep due to our awakening to the after life. In the final couplet Donne explains what becomes of Death once it has taken our life. Donne says, "And death shall be no more; death, thou shalt die." (14) ...read more.

It is evident that death can creep up on his client. In example, often times, when one experience a joyous time, time seems to "fly". In the same respect, Emily Dickinson states, "Or rather - He (the setting sun) passed Us?" (13). This line indicates that a pleasant time was cut short (15,16). Before she knew it, the cold "Dews drew quivering and chill" (14). The tone of the poem changes accordingly and becomes much colder as the couple goes from passing children on a playground and the setting sun, to passing chill dew and arriving at a graveyard. This poem exercises both the thoughts and emotions of its reader and can effectively change one's viewpoint of an eternal future. Eternity and Death are two important characters in Emily Dickinson's "Because I could not stop for Death". In fact, eternity is a state of being. Dickinson believed in an eternity after Death (24). Agreeably, one can say that Emily Dickinson's sole purpose in this poem is to show no fear of death. This poem then, puts on immortality through an act of mere creativity. Both, Emily Dickinson and John Donne, show no fear of death. The contrast between them is that Donne aggressively and directly addresses Death, his tone critical and belittling, and on the other hand Dickinson's tone is a more tender one (by using the words "kindly", "slowly"). Donne compare death to sleep or drugs and in Dickinson's poem, her ride with death was fuzzy and the specifics were hard to make out- like a dream. By: Gal Shalem Presented to: Juliet aharoni "Ramot-Hefer" high school 8. 4. 02 ...read more.

There are some good points made in this essay, particularly when it comes to the analysis of language. As the title states that this is a comparative essay, comparisons must be made throughout the essay rather than in this brief way at the end of the essay.