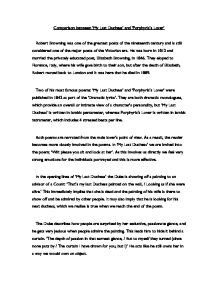 Comparison between 'My Last Duchess' and 'Porphyria's Lover'

Comparison between 'My Last Duchess' and 'Porphyria's Lover' Robert Browning was one of the greatest poets of the nineteenth century and is still considered one of the major poets of the Victorian era. He was born in 1812 and married the privately educated poet, Elizabeth Browning, in 1846. They eloped to Florence, Italy, where his wife gave birth to their son, but after the death of Elizabeth, Robert moved back to London and it was here that he died in 1889. Two of his most famous poems: 'My Last Duchess' and 'Porphyria's Lover' were published in 1842 as part of the 'Dramatic lyrics'. They are both dramatic monologues, which provide an overall or intimate view of a character's personality, but 'My Last Duchess' is written in iambic pentameter, whereas Porphyria's Lover is written in iambic tetrameter, which includes 4 stressed beats per line. Both poems are narrated from the male lover's point of view. As a result, the reader becomes more closely involved in the poems. In 'My Last Duchess' we are invited into the poem; 'Wilt please you sit and look at her'. As this involves us directly we feel very strong emotions for the individuals portrayed and this is more effective. In the opening lines of 'My Last Duchess' the Duke is showing off a painting to an advisor of a Count: 'That's my last Duchess painted on the wall, / Looking as if she were alive.' This immediately implies that she is dead and the painting of his wife is there to show off and be admired by other people. It may also imply that he is looking for his next duchess, which we realise is true when we reach the end of the poem. The Duke describes how people are surprised by her seductive, passionate glance, and he gets very jealous when people admire the painting. This leads him to hide it behind a curtain. ...read more.

Similarly the poem uses first person narrative, hence the fact that it is dedicated to her husband, Robert Browning, whom she was married to and also in 'Sonnet 116' nature is used to create imagery, which is emphasised by the metaphorical language: Love 'is the star to every wandering bark'. Love is a guiding light implying it will overcome any difficulties in a relationship. This is also imitated in Shakespeare's play 'A Midsummer Night's Dream' where 'the course of true love never did run smooth.' This explains that a relationship will go through its bad times and have problems but in the end love will always win through. 'How do I love thee?' is built upon a rhetorical question, which is also applied to 'First Love'. The use of rhetorical questions involves the reader and I think they are very effective as the reader is made to think about the different ways you can love someone and our first love, which we all remember. Throughout 'How Do I Love Thee' Browning tries to quantify love: 'Let me count the ways'. She cannot enumerate the different ways she can love her husband for they are innumerable. Likewise in 'Sonnet 116' Shakespeare tries to measure love. The height of the 'star' can be measured but its value cannot, which metaphorically explains the reasoning behind love being immeasurable. Both 'How do I Love Thee?' and 'Sonnet 116' make reference to the idea of love being eternal. This is a common theme, which runs through all the poems including 'Porphyria's Lover' and 'My Last Duchess' where both men refer to their dead wives as 'alive' indicating their love is everlasting. In 'How Do I Love Thee?' Browning makes obvious referral to everlasting love by ending the poem with the line 'I shall but love thee better after death.' This highlights the point that love will win through any problem a relationship comes across. ...read more.

Both these two poems from Romantic Love explain how love does not alter and sustains even after death. This is equally represented in 'Remember', 'To Mary' and 'Song'. The second verse of 'To Mary' deals with emotions and how Clare cannot forget her. He is trying to move on and 'think and speak of other things' but like 'Porphyria's Lover' he is unable to and his 'memory clings'. Similarly in 'Remember' Rossetti prompts her man to move on and carry out the 'future plans' whether it be alone or with someone else. She does want his life to come to an end just because hers has. This poem is very different to Rossetti's 'Song', as it is clear she wants him to remember the good moments they had and move on unlike Porphyria's lover who couldn't get over it and became obsessed with her. 'Song' is more varied with her emotions where at one stage she wants him to move on as well as remembering her and mourning for his loss. When we think of love we immediately think of romance and the idealistic view that Shakespeare portrays in 'Sonnet 116'. However love has many different aspects to it including obsession and death, which we do not contemplate for. The poems deal with all these issues but in conclusion most have one common theme of eternal love. They exhibit the idea of being reunited one day but in different ways. The Duke has the picture, which he can admire to remind himself of her as well as showing off to his guests. Shakespeare clearly believes that love is eternal and if it is not then he promises to destroy his sonnets and all poems in the love and death section hope that they will meet again one day in 'the silent land.' In conclusion I hope to have shown a detailed examination of the poems I have studied and made reference to others, showing how they link in with many of the poems. Love is something we all want to encounter one day but as we have seen can have bitter consequences. ...read more.