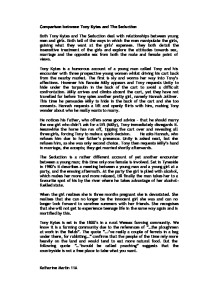 Comparison between Tony Kytes and The Seduction

Comparison between Tony Kytes and The Seduction Both Tony Kytes and The Seduction deal with relationships between young men and girls. Both tell of the ways in which the men manipulate the girls, gaining what they want at the girls' expenses. They both detail the insensitive treatment of the girls and explore the attitudes towards sex, marriage and the opposite sex from both the male and female point of views. Tony Kytes is a humorous account of a young man called Tony and his encounter with three prospective young women whilst driving his cart back from the nearby market. The first is sly and worms her way into Tony's affections. However his fianc�e Milly appears and Tony requests Unity to hide under the tarpaulin in the back of the cart to avoid a difficult confrontation. Milly arrives and climbs aboard the cart, yet they have not travelled far before Tony spies another pretty girl, namely Hannah Jolliver. This time he persuades Milly to hide in the back of the cart and she too consents. Hannah requests a lift and openly flirts with him, making Tony wonder about who he really wants to marry. He notices his Father, who offers some good advice - that he should marry the one girl who didn't ask for a lift (Milly), Tony immediately disregards it. ...read more.

and at another point Tony notices "a feather he knew well - the feather in Milly's hat" this would indicate that women of the period were more likely to wear some sort of head attire. The men too also seem to wear hats and, when meeting women, Tony at least is accustomed to "taking off his hat". This would imply that it was socially expected of the men to remove their hats in the presence of women. As not many males in this day and age would think about removing their hats for a woman, this in turn implies that ladies gained more respect from men than the women of today do. The 1800's are a time when offspring are less likely to move far from home and boys will often grow up to work alongside their fathers. Hence the quote "He had been to market to do business for his father". This shows a physical closeness between Tony and his father, but it does not necessarily mean that he is mentally close with him. That would explain why "...of all the things that could have happened to wean him from Milly there was nothing so powerful as his father's recommending her." ...read more.

In this way she is like Hannah, who also asks leading questions. Hannah is very direct and leads Tony on by sitting close to him and batting her eyes. However she has more pride than the other two, and wont marry Tony even though he asked her first - she is too humiliated. Transport: "...Wagon seemed to be empty but for the loose tarpaulin" "...Creep under the empty sacks just here in the front of the wagon" "...Crouched down just behind the seat" "...A sort of little screaming squeak under those sacks? Why, you've been carrying corn, and there's mice in this wagon..." "'Tis the axle" "Would you mind taking the reins a moment..." "...The off wheels went up the bank, the wagon rose sideways till it was quite on the edge upon the near axles..." Scene: "...He reached the foot of the hill... waiting for him at the top... Unity Sallet" "...Over the hedge and past the turning..." "...Upper window of a house that stood beside the road..." "...Coming to the corner where we turn round to drop down the hill to Lower Longpuddle" "...In the afternoon..." "...'Tis almost Christmas" "...In dry weather" "...What a fine day it is... for this time of year?" Period: "...If it had been Milly, twould have been quite proper; but you and Hannah Jolliver going about by yourselves-" Katharine Martin 11A ...read more.