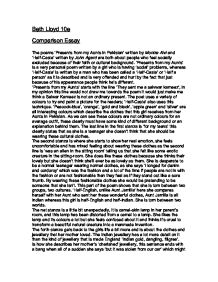 Beth Lloyd 10e Comparison Essay The poems 'Presents from my Aunts in Pakistan' written by Moniza Alvi and 'Half-Caste' written by John Agard are both about people who feel socially excluded because of their faith or cultural background. 'Presents from my Aunts' is a very personal poem written by a girl who is having 'social' problems, whereas 'Half-Caste' is written by a man who has been called a 'Half-Caste' or 'Half a person' as it is described and is very offended and hurt by the fact that just because of his appearance people think he's different. 'Presents from my Aunts' starts with the line 'They sent me a salvwar kameez', in my opinion this line would not draw me towards the poem it would just make me think a Salwar Kameez is not an ordinary present. The poet uses a variety of colours to try and paint a picture for the readers; 'Half-Caste' also uses this technique. 'Peacock-blue', 'orange', 'gold and black', 'apple green' and 'silver' are all interesting colours which describe the clothes that this girl receives from her Aunts in Pakistan. ...read more.

Her clothes had small mirrors on them, which she likes looking at herself in, 'But often I admired the mirror-work, tried to glimpse myself in the miniature glass circles'. She ended up feeling alone with only a tin boat to play with. Looking at photographs she imagined herself being in the pictures where she was born. 'Fractured' a strong word meaning broken, her land was broken. She sometimes imagined seeing Lahore a city in Pakistan 'I saw Lahore my Aunts in shaded rooms screened from male visitors' in Pakistan women were allowed no attention from men. 'I was there of no fixed nationality' she was in India but still with no real nationality meaning where ever she goes she will never be a 'normal' person, as she stares through the fence in to the Shalimar Gardens, beautiful gardens in Lahore, as she longs to go in. 'Half Caste' is my favourite of the two; it is more suited for me and is what I love to read. 'Excuse me standing on one leg I'm half-caste' this first sentence is extremely strange and is good because it makes you think, What is this about? ...read more.

difference between both of these poems are that 'Presents from my Aunts' uses good standard English and the author must have adjusted well and was very confident with her English, whereas 'Half-Caste' uses poor English and has no punctuation in it what so ever, it is written more like a speech. Agard has written it as a Caribbean person would pronounce it. The other visible difference is the way they are both set out on the page, 'Half-Caste' is set out with very short lines and very snappy, however 'Presents from my Aunts' is scattered about and 'fractured'. In my opinion my favourite is 'Half-Caste' because it is more interesting and has much stronger points about it, 'Presents from my Aunts' is mostly about what kind of clothes she likes to wear and I don't really think the way people dress is who they really are. People should not have to be judged just because of their different skin colours. They were both interesting poems to read and they do teach you a lot about the way some people can treat other people who may not 'look' the same on the outside, even though they may be wonderful caring people on the inside. ...read more.