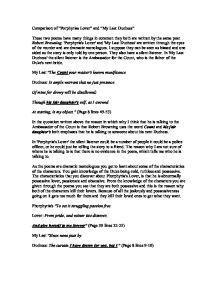 Comparison of "Porphyrias Lover" and "My Last Duchess" These two poems have many things in common they both are written by the same poet Robert Browning. 'Porphyria's Lover' and 'My Last Duchess' are written through the eyes of the murder and are dramatic monologues. I suppose they can be seen as biased and one sided as the story is only told by one person. They also have a silent listener. In 'My Last Duchess' the silent listener is the Ambassador for the Count, who is the father of the Duke's next bride. My Last "The Count your master's known munificence Duchess: Is ample warrant that no just pretence Of mine for drowy will be disallowed; Though his fair daughter's self, as I avowed At starting, is my object." (Page 8 lines 49-53) In the quotation written above the reason in which why I think that he is talking to the Ambassador of the Count is that Robert Browning uses the word Count and his fair daughter's both emphases that he is talking to someone about his next Duchess. In 'Porphyria's Lover' the silent listener could be a number of people it could be a police officer, or he could just be telling the story to a friend. The reason why I am not sure of whom he is talking to is that there is no evidence in the poem, which tells me who he is talking to. ...read more.

The Duchess and Phorphyria both do not car about stooping to different levels. The atmospheres in the poems are quite different due to how the men react around their lovers. In 'My Last Duchess' the atmosphere feels as though the Duke and Duchess only see each other occasionally. My Last "Whene'er I passed her; but who passed without Duchess: Much the same smile?" (page 8 lines 44-45) The word passed in this the quotation above emphasises the fact that the Duke and the Duchess are distant from each other. By using the word passed in this kind of content tells me that they don't see each other much. The word Whene'er also has emphasises on this because whene'er gives you the impression that they only pass by each other on the rare occasion and if they do pass each other they don't talk they just smile. You realise that Phorphyria and her lover are affectionate and passionate towards each other by the atmosphere in the poem. When Phorphyria is not in the cottage with her lover the weather represents the way that the lover feels. When she's not there he feels angry because he thinks that nature is purposefully having a storm so that it will prevent Phorphyria from getting to him. Phorphyria's "The rain set early in tonight, Lover: The sullen wind was soon awake, It tore the elm tops down for ...read more.

This quotation tells you this. Prophyria's "So, she was come through wind and rain Lover: Be sure I looked up at her eyes Happy and proud; at last I knew Prophyria worshipped me..." (page 30 lines 30-33) He is convinced that Porphyria worshipped him because she left an important feast and travelled through a storm just to be with him. He may have made the wrong decision but he had the power to kill her physically. Porphyria's "That moment she was mine, mine fair Lover: Perfectly pure and good; found A thing to do, and all her hair In one yellow string I wound Three times her little throat round..."(Page 30 lines 36-40) The two poems written by Robert Browning are very similar yet also very different. They are similar in the fact that they are both dramatic monologues and that they are both involve murdering someone that they love. The differences between the poems are the language used during the two poems. In 'Phorphyria's Lover' the language is trying to make you feel sorry for Phorphyria but also it makes you feel for the Lover. However in 'My Last Duchess' the language is trying to persuade you that the Duke did the wrong thing killing the Duchess. Both poems give you a lot of information on how the Duke and the lover are feeling. Overall I think that the poems are similar as they basically have the same plot and the same kind of characters. ...read more.