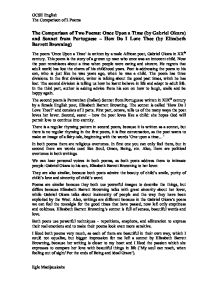 The Comparison of Two Poems: Once Upon a Time (by Gabriel Okara) and Sonnet from Portuguese - How Do I Love Thee (by Elizabeth Barrett Browning) The poem 'Once Upon a Time' is written by a male African poet, Gabriel Okara in XXth century. This poem is the story of a grown up man who once was an innocent child. Now the poet reminisces about a time when people were caring and sincere. He regrets that adult world has lost the charm of his childhood years. Poet is addressing the poem to his son, who is just like he was years ago, when he was a child. The poem has three divisions. ...read more.

First part, octave, tells us of the many ways the poet loves her lover. Second, sestet - how the poet loves like a child: she hopes God will permit love to continue into eternity. There is a regular rhyming pattern in second poem, because it is written as a sonnet, but there is no regular rhyming in the first poem, it is free conversation, as the poet wants to make an image of a fairy-tale, beginning with the words 'One upon a time...' In both poems there are religious overtones. In first one you can only feel them, but in second there are words used like Soul, Grace, Being, etc. Also, there are political overtones in both writings. ...read more.

Elizabeth Barrett Browning's sonnet is full of senses, beautiful words and love. Both poets use powerful techniques - repetitions, anaphora, and alliteration to express their real emotions and to make their poems look even more sensitive. I liked both poems very much, as each of them are beautiful in their own way, which I could not equalize, but bigger impression for me left a sonnet by Elizabeth Barrett Browning, because her writing is closer to my heart and I liked the passion which she expresses to compare her love with beautiful things in life ('My soul can reach, when feeling out of sight/ For the ends of Being and ideal Grace'). ?? ?? ?? ?? GCSE English The Comparison of 2 Poems Egle Macijauskaite ...read more.