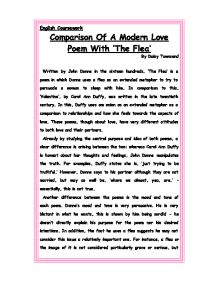 Comparison Of A Modern Love Poem With 'The Flea'.

English Coursework Comparison Of A Modern Love Poem With 'The Flea' By Daisy Townsend Written by John Donne in the sixteen hundreds, 'The Flea' is a poem in which Donne uses a flea as an extended metaphor to try to persuade a woman to sleep with him. In comparison to this, 'Valentine', by Carol Ann Duffy, was written in the late twentieth century. In this, Duffy uses am onion as an extended metaphor as a comparison to relationships and how she feels towards the aspects of love. These poems, though about love, have very different attitudes to both love and their partners. Already by studying the central purpose and idea of both poems, a clear difference is arising between the two; whereas Carol Ann Duffy is honest about her thoughts and feelings, John Donne manipulates the truth. For examples, Duffy states she is, 'just trying to be truthful.' However, Donne says to his partner although they are not married, but may as well be, 'where we almost, yea, are,' - essentially, this is not true. Another difference between the poems is the mood and tone of each poem. Donne's mood and tone is very persuasive. He is very blatant in what he wants, this is shown by him being sordid - he doesn't directly explain his purpose for the poem nor his desired intentions. ...read more.

Her use of full stops at brief, abrupt lines, for example, 'here.' causes more bluntness that in turn also set the honest tone. The effect of this is it appears as if she is talking very realistically and straight forwardly. This is simple but powerful language and throughout the poem, Duffy uses progressively more powerful words linked to the feelings of love. This suggests that this is what she feels the various aspects and stages of love are. In the first stanza, she describes an onion similar to the 'careful undressing of love'. This makes love appear very vulnerable but also sensual. This has three meaning - the literal sense of an actual onion, a physical undressing of clothes leading to intimacy, and she could mean the undressing as in getting to know each other. In her next stanza, she then relates the onion to blinding someone with tears, 'like a lover.' Perhaps this is from personal experience. We see she has used, 'fierce' to describe another emotion later on in the poem. This is an even stronger word than examples before. Ultimately, she then describes love as, 'lethal.' This implies that love is not only as powerful as she has mentioned before, but actually could cause someone harm. ...read more.

Obviously, Duffy uses an onion in comparison to love and Donne uses a flea in persuasion to try to get a woman to sleep with him. There are also many other examples of this. For example, Duffy describes the onion as a 'moon wrapped in brown paper' and relates this to 'the careful undressing of love,' and she says that with both love and an onion, 'its fierce kiss will stay on your lips.' Donne also does this - for example, 'this flea is you and I'. He means this by the flea is the two of them as it has their blood in it. The flea also represents their relationship. Also, both poems are also very obviously connected to the time and culture that they were written. 'The Flea', is an example of very traditional poetry in that with its poetic and linguistic devices, and has a very fixed structure, as explained before. In comparison, 'Valentine' illustrates an example of poetry today - with a much more casual structure and impression that the words have flowed. 'The Flea', however, uses an untraditional subject matter - as in the time this period was written, it was not very likely for sex before marriage to be written about like this. So, in this way, Donne had quite a modern poem that fits with today's view on sex before marriage. ...read more.