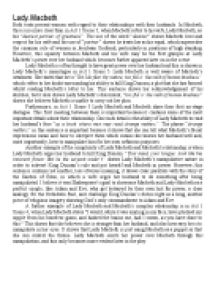 Transfer-Encoding: chunked ﻿Lady Macbeth Both texts present women with regard to their relationships with their husbands. In Macbeth, this is no more clear than in Act 1 Scene 5, when Macbeth refers to his wife, Lady Macbeth, as his ?dearest partner of greatness?. The use of the word ?dearest? shows Macbeth love and respect for his wife and the use of ?partner? shows he treats her as his equal, which supersedes the common role of women in Jacobean Scotland, particularly in positions of high standing. However, this equality between Macbeth and his wife may be the first glimpse at Lady Macbeth?s power over her husband which becomes further apparent later on in the scene. Lady Macbeth is often thought to have great power over her husband and this is shown in Lady Macbeth?s monologue in Act 1 Scene 5. Lady Macbeth is well aware of Macbeth?s weakness. She states that he is ?Yet I do fear thy nature, too full o? the milk of human kindness? which refers to her doubt surrounding his ability to kill King Duncan, a plot that she has formed whilst reading Macbeth?s letter to her. This sentence shows her acknowledgement of his abilities, but it also shows Lady Macbeth?s discontent, ?too full o? the milk of human kindness? shows she believes Macbeth is unable to carry out her plan. Furthermore, in Act 1 Scene 5 Lady Macbeth and Macbeth share their first on-stage dialogue. This first meeting between them is important because it contains some of the most important details about their relationship. One such detail is the ability of Lady Macbeth to read her husband?s face ?as a book, where men may read strange matters?. ...read more.

She knows her womanly features would only drag her down in carrying out her devious plot, so knowing she needs help, calls down the ?spirits that assist murderous thoughts? in order to remove the ?woman? from her. However, this idea of ?spirits? gives way to some ideas as to the setting of the play. The play, being set in Jacobean-era Scotland which was a place where beliefs in the occult were common, shows us that the idea of Lady Macbeth being a ?witch?, or other practiser of the supernatural, is not entirely impossible. She has the ability to beckon spirits to follow her mischievous tasks, and witches also feature twice in the play, both times meeting Macbeth to give him a prophecy, which Lady Macbeth whole heartedly believes. And Lady Macbeth herself makes a prophecy ?The fatal entrance of King Duncan?, this ability to prophesise is something only four characters share, the three witches and Lady Macbeth. Shakespeare and Steinbeck portray the deaths of their female characters in vastly different. Lady Macbeth?s death in Act 1 Scene 5 is actually off-screen with the majority of her last moments occurring in Act 5 Scene 1. One of the most iconic moments in all of Shakespeare's works occurs as we begin to see Lady Macbeth?s rapid descent into madness ?Out damned spot! Out I say!? is particularly effective because it is a perfect case of irony. Earlier in the play, Lady Macbeth persuades her husband to kill King Duncan and reassures him that ?A little water will clean us of our misdeeds?. This irony perfectly encapsulates the demise of Lady Macbeth because she cannot rid herself of the blemish that marks her part in the murder. ...read more.

There is also a certain amount of irony in this, because Curley?s Wife married her husband to be liberated from the oppressive grasp of her mother, only to be even more controlled by Curley. Curley?s Wife?s Death towards the end of the book presents a stark contrast between her death and Lady Macbeth?s. Her last appearance has a drastic effect on how she is presented in the novella. One of the most interesting pieces of imagery used by Steinbeck is also present here. Her dream of being in the limelight is unrealistic as all she ever does is attract negative attention. In the story it states that when she entered the barn the "sunshine in the doorway was cut off", This not only shows the fact that she herself is preventing herself from following her ?American Dream? but it also foreshadows her eventual death. The clearest details about Curley?s Wife?s Death is the innocence she has before her eventual death, and how this is carried with her into her death. The true pureness of her character is expressed only after she has died, where her face is described as being, "sweet and young" and the "ache for attention was all gone for her face" The use of the word ache shows not only that Curley?s Wife?s crave for attention was strong, but that it causes her great pain and eventual misfortune. This is shown throughout the novella when she clearly seeks attention, and seems dejected to be denied it. This attention-craving is also consistent with that of someone much younger than her, further reinforcing the idea of her purity, particularly in the fact that she was so young. [a]Compare to Curley?s Wife?s innocence before this in Feminine attributes. [b]Made a comment ...read more.