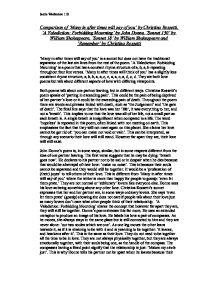 Comparison of 'Many in after times will say of you' by Christina Rossetti, 'A Valediction: Forbidding Mourning' by John Donne, 'Sonnet 130' by William Shakespeare, 'Sonnet 18' by William Shakespeare and 'Remember' by Christina Rossetti 'Many in after times will say of you' is a sonnet but does not have the traditional separation of the last six lines from the rest of the poem. 'A Valediction: Forbidding Mourning' is a poem that has a constant rhyme structure of a, b, a, b repeating throughout four line verses. 'Many in after times will think of you' has a slightly less consistent rhyme structure, a, b, b, a, a, c, c, a, a, c, a, d, c, d. They are both love poems but talk about different aspects of love with differing viewpoints. Both poems talk about one partner leaving, but in different ways. Christina Rossetti's poem speaks of 'parting in exceeding pain'. This could be the pain of being deprived of her partner's love or it could be the exceeding pain of death. Throughout the poem there are words and phrases linked with death, such as 'the Judgement' and 'the gate of death'. The final line says that the love was her 'life', it was everything to her, and not a 'breath'. ...read more.

A bond that cannot fully be described between two things, which are believed to be there, but cannot be touched, seen or heard. John Donne was a metaphysical poet and used wit and intellect to fully express his thoughts. He uses a wide range of imagery to show the reader what he clearly means. An example of his wit is when he compares his love to 'gold to ayery thinnesse beate.' The gold is just like his love, it can be beaten thinner and spread further apart but it always stays as one object. Next I will look at Shakespeare's Sonnet 130, which is very different to a conventional love poem. For most of the poem Shakespeare talks badly of his lover. In a love poem you expect the author to be hailing their partner with compliments, whereas Shakespeare talks of his partner in a foul way. He insults her through out the poem with comments such as her 'eyes are nothing like the sun'. You would expect Shakespeare to say her eyes were beautiful like the sun, rather than saying they are nowhere close to comparing to the sun. He insults her further when he says her hair is like 'black wires.' ...read more.

This is once again generous as she would rather him be happy without remembering her than to spend his life grieving her death. Rossetti uses an oxymoron to emphasise a point in the final two lines; 'you should forget and smile, Than that you should remember and be sad.' The opposites exaggerate one another and emphasise the fact that she wants her partner to be happy when she dies. This sonnet contrasts to the two by Shakespeare that I have previously analysed in the way it is laid out. There is a separation after the eighth line, not only in lay out but also in the idea it is portraying. In the first eight lines Rossetti talks about when she dies and how she wants to be remembered, but after the split she speaks of him not letting his grief stop him from having fun in his life. This poem also has the same rhyme structure as 'Many in after times will say of you', also by Chrstina Rossetti. Although all of the poems I have analysed have been on the subject of love they have conveyed very different interpretations of the love they speak of, utilising a wide variety of differing techniques. It is surprising that a number of poems based on the same subject matter can show such different ideas. Jamie Warburton 11S ...read more.