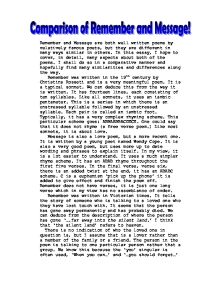 Comparison of remember and message

Remember and Message are both well written poems by relatively famous poets, but they are different in many ways similar in others. In this essay, I hope to cover, in detail, many aspects about both of the poems. I shall do so in a comparative manner and hopefully find many similarities and differences along the way. Remember was written in the 19th century by Christina Rosseti and is a very meaningful poem. It is a typical sonnet. We can deduce this from the way it is written. It has fourteen lines, each consisting of ten syllables. Like all sonnets, it uses an iambic pentameter. This is a series in which there is an unstressed syllable followed by an unstressed syllable. Each pair is called an iambic foot. Typically, it has a very complex rhyming scheme. This particular scheme goes: ABBAABBACDECE. One could say that it does not rhyme (a free verse poem.) Like most sonnets, it is about love. Message is also a love poem, but a more recent one. ...read more.

one can therefore rule out a family member because you would expect some body to talk to their entire or close family as a group. Also, the language used indicates that the poem is directed to a lover and someone who the person wanted to spend time with in future, 'When you can no more hold me by the hand.' and '...our future that you planned.' There is no reference to the gender of the person, but I assume that it is a woman because the poet is a woman and therefore would find it easier to write from a woman's point of view. It is a truly tragic case of true love that went drastically wrong, however, the deceased woman does not want her lover to be sad. It is a very touching poem. On the other hand, message displays a totally different kind of love. It is a typical case of unrequited love. ...read more.

On the other hand I did enjoy the repetition in message because it created a great atmosphere. I find it very hard to choose my favourite out of the two, but I feel I could relate more to message due to the more up to date concepts of love. Also, it was set in London, which is obviously where I live. As much as I liked the language in Remember, it did not have a good feel to it. I like a poem to have verses and a good rhyming scheme, which Message did have. Finally, I particularly liked the final line in Message, which sums up the entire poem, 'pick up the phone.' It rounded the poem off nicely. After studying these poems and on second readings, I have noticed many devices and techniques used in poem and uncovered many things that I did not understand fully on first glance. Hopefully, this will help me in the future to write great poems. I now truly admire all poets out there who can write such meaningful things. [A(AC1] [A(AC1] ...read more.