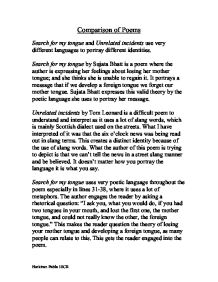 Comparison of Search for my tongue by Sujata Bhatt and Unrelated incidents by Tom Leonard.

Comparison of Poems Search for my tongue and Unrelated incidents use very different languages to portray different identities. Search for my tongue by Sujata Bhatt is a poem where the author is expressing her feelings about losing her mother tongue; and she thinks she is unable to regain it. It portrays a message that if we develop a foreign tongue we forget our mother tongue. Sujata Bhatt expresses this valid theory by the poetic language she uses to portray her message. Unrelated incidents by Tom Leonard is a difficult poem to understand and interpret as it uses a lot of slang words, which is mainly Scottish dialect used on the streets. What I have interpreted of it was that the six o'clock news was being read out in slang terms. ...read more.

This makes the reader question the theory of losing your mother tongue and developing a foreign tongue, as many people can relate to this. This gets the reader engaged into the poem. In lines 31-38 poetic language is used to express the sensation of regaining the mother tongue: "the bud opens, the bud opens in my mouth." The writer uses repetition to emphasize the fact she is regaining her mother tongue and this is also used in line 32 on the repetition of growth. I found it hard to interpret Unrelated incidents, but I found that it creates its identity by the slang language it uses. I also discovered the theory that the author is trying to convey. ...read more.

There is a maximum of 3 to 4 words on a line and this makes you read the poem very quickly. This creates the effect of the language which is used on the streets, as people talk very quickly in slang. The spacing of this poem helps to create its identity. Search for my tongue is a poem I can personally relate to as I have a mother tongue and a foreign tongue. What Sujata Bhatt has expressed is true as your mother tongue always remains intact. Search for my tongue uses poetic language to portray its identity. It conveys a message that you will always have your mother tongue intact. Unrelated incidents creates its identity by the slang language used and it portrays a message that it is what you say that counts not how it is expressed. Harkiran Pabla 10CR ...read more.

The candidate here makes a good effort to analyse the poems and offers some very interesting and original ideas when it comes to the language analysis of both poems, but there is a great deal of analysis lacking and subsequently ...

The candidate here makes a good effort to analyse the poems and offers some very interesting and original ideas when it comes to the language analysis of both poems, but there is a great deal of analysis lacking and subsequently the candidate cannot achieve higher than a high C grade for GCSE because there is not enough emphasis given on the use of imagery and structure. Though much is attempted and briefly considered in parts of the language analysis (metaphors, etc.) there is not enough of sufficient detail to gain many more marks.

The structure is what lets the candidate down the most. Though an admirable attempt, the candidate's essay structure needs a lot of work. Instead of commenting 'Poem-by-Poem' and therefore hindering much chance of direct, explicit poetic comparison, it would first be better to comment specifically on the use of language in 'from: Search For My Tongue' and then on 'from: Unrelated Incidents', commenting on their similarities and differences. The candidate should then move on to the use of imagery in both, or perhaps go more specific and talk about the use of phonetic language/native languages and what this says about the poems. This is the level of detail required for a stronger mark.

The Level of Analysis is good in terms of the language analysis, with the candidate taking good time to comment fairly on it's use and effect. There is also some evidence of structural analysis, though this is not greatly successful due to an unclear analytical form in that there is no actual analysis being made - it is more a continuation of thoughts from the candidate. This happens in some parts during the language analysis, for instance: "Search for my tongue is a poem I can personally relate to as I have a mother tongue and a foreign tongue. What Sujata Bhatt has expressed is true as your mother tongue always remains intact." wins no marks at all because it is a personal response for starters (and therefore not objective, which all GCSE analysis must be), which means that, for seconds, the candidate cannot comment critically on the use of a poetic, linguistic or rhetorical device in the poem in question.

To prevent this, candidates should avoid mentioning themselves in the poem. If they wish to talk about audience response then it's perfectly acceptable to do so, but they should instead reference "readers" or "the poem's audience effect" rather than themselves. Where this candidate could also improve is in thinking about the wider context of the poem. The poem 'from: Search For My Tongue' does not deal exclusively with the idea that existing in a different culture "makes you lose your mother tongue". The candidate realises that the tongue is a metaphor and there are marks awarded for this, but what about the wider message? Bhatt is making a commentary about how cultures or not mutually exclusive and individuals merge together their life experiences and personalities as a result of their time spent in other cultures. You don't suddenly become English if you move to England and nor do you stay native - you become a mixture of both cultures as you absorb the environment around you, often forgetting some elements of your native culture in the process. This is a fact of life and is the bigger message Bhatt is making in 'Search For My Tongue'.

The Quality of Written Communication is fine as far as clarity in written expression goes, but some exam boards may expect to see the titles of published works all spelt with capital letters (e.g. 'Search For My Tongue', 'from: Unrelated Incidents') and written inside inverted commas (''). Other than that there is very little else to critique other than the relatively sound use of grammar, punctuation and spelling, which helps convey the information as intended by the candidate to the examiner, and shows the examiner there is a sound understanding of the infrastructure of the English language and how it can be used to shape meaning.