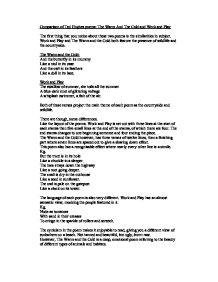 Comparison of Ted Hughes poems: The Warm And The Cold and Work and Play

Comparison of Ted Hughes poems: The Warm And The Cold and Work and Play The first thing that you notice about these two poems is the similarities in subject. Work and Play and The Warm and the Cold both feature the presence of wildlife and the countryside. The Warm and the Cold: And the butterfly in its mummy Like a viol in its case And the owl in its feathers Like a doll in its lace. Work and Play The swallow of summer, she toils all the summer A blue-dark knot of glittering voltage A whiplash swimmer, a fish of the air. Both of these verses project the main theme of each poem as the countryside and wildlife. There are though, some differences. Like the layout of the poems. ...read more.

E.g. Nude as tomatoes With sand in their creases To cringe in the sparkle of rollers and screech. The cynicism in the poem makes it enjoyable to read, giving you a different view of sunbathers on a beach. Not tanned and beautiful, but ugly, burnt raw. However, The Warm and the Cold is a deep, emotional poem referring to the beauty of different types of animals and habitats. Work and Play's main subject is the swallow, but also projects a deeper meaning that gets the reader thinking about the effect of humans on the countryside. Ted Hughes describes the sunbathers as 'roasting and basting' in the sun and mosquitoes as 'man-eating flies, jab electric shock needles' into the helpless day-trippers. This sentence being a very sarcastic comment. Hughes comments on the swallow throughout the poem, projecting her as a beautiful 'boomerang of rejoicing shadow'. ...read more.

E.g. Freezing dusk is closing Freezing dusk has tightened Moonlight freezes the shaggy world. Such a frost (this last couple of lines, altering the pattern of a four or five lined beginning of each stanza) The work I have done on the two poems by Ted Hughes has made me realise his appreciation for wildlife and the countryside. He seems to despise all things materialistic especially in Work and Play, when he mocks the sunbathers, wanting to be tanned and attractive, but not realising they are ugly and red, a blotch on the landscape of golden sand and blue waters, their cars metal and rusty on the black road, slicing through the natural, precious countryside, choking it with fumes. Hughes seems almost angry towards everything that ruins the landscape and the habitats of many species. The poems could be used to advertise Greenpeace, they are so emotional! Isobel Manley ...read more.