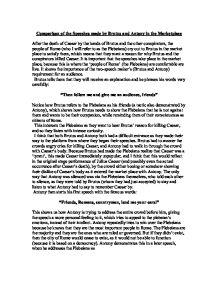 Comparison of the Speeches made by Brutus and Antony in the Marketplace After the death of Caesar by the hands of Brutus and the other conspirators, the people of Rome (who I will refer to as the Plebeians) cry out to Brutus in the market place to satisfy them, which means that they want a reason for why Brutus and the conspirators killed Caesar. It is important that the speeches take place in the market place, because this is where the 'people of Rome' (the Plebeians) are comfortable are live. It shows the importance of the two-speech maker's (Brutus and Antony) requirement for an audience. Brutus tells them that they will receive an explanation and he phrases his words very carefully: "Then follow me and give me an audience, friends" Notice how Brutus refers to the Plebeians as his friends (a tactic also demonstrated by Antony), which shows how Brutus needs to show the Plebeians that he is not against them and wants to be their companion, while reminding them of their consciousness as citizens of Rome. This interests the Plebeians as they want to hear Brutus' reason for killing Caesar, and so they listen with intense curiosity. I think that both Brutus and Antony both had a difficult entrance as they made their way to the platform from where they began their speeches. Brutus had to answer the crowds angry cries for killing Caesar, and Antony had to walk in through the crowd with Caesar's body. Because Brutus had made the Plebeians realize that Caesar was a 'tyrant', this made Caesar immediately unpopular, and I think that this would reflect in the original stage performance of Julius Caesar (and possibly even the actual occurrence after Caesar's death), by the crowd either booing or somehow showing their dislike of Caesar's body as it entered the market place with Antony. The only way that Antony was silenced was via the Plebeians themselves, who told each other to silence, as they were told by Brutus (whom they had just accepted) ...read more.

When the conspirators were planning the death of Caesar, they discussed whether they should kill Antony. They knew that Antony was a loyal servant of Caesar and that he probably would not like the idea of Caesar being murdered. Cassius seemed to realize that Antony would oppose the conspirators, Brutus does not think that Antony would oppose them, because he thinks that Antony would realize that they are killing Caesar for the good of Rome. Cassius' warning to Brutus is much like the soothsayer' warning to Caesar, or Artemidorus' warning to Caesar in the way that the person whom is warned (Caesar and Brutus) do not think that the warnings are relevant and ignore the person who is warning them. Soothsayer to Caesar: "Beware the Ides of March" Caesar: "He is a dreamer, let us leave him. Pass" Cassius to Brutus: "Let Antony and Caesar fall together" Brutus: "...for Mark Antony, think not of him, for he can do no more than Caesar's arm when Caesar's head is off" I think that this was Brutus' largest mistake: trusting Antony and allowing him to make a speech at Caesar' funeral, when Brutus (or no other conspirator) was not present. In Antony' speeches, Antony did not try to act as a ruler talking to the people (as Brutus seemed to do) but he seemed to talk to the people as though he was one of them. The Plebeians knew that Antony was not a high ruler, and Antony made himself out to be of the local senators who listened to the people and truly respected the people. Antony uses repetition to get his message across the Plebeians. He seems to use Brutus' own ammunition against Brutus in order to sway the views of the people. He does this by referring to Brutus' use of 'honour'. As I said earlier, Brutus called himself an honourable man, which at the time served him well as it helped sway the Plebeians onto his side. ...read more.

Conveniently it was when Caesar overcame the Nervii (a fierce tribe in Gaul who mounted a surprise ambush against Caesar, but were repulsed and slaughtered by Caesar, becoming a most brilliant military victory achievement, causing rejoicement in Rome). This reminds the people of Caesar' victory of Rome and makes them feel disloyal. Whether or not the mantle was the one worn by Caesar when he defeated the Nervii or not is irrelevant (although it does seem a bit too convenient, and is probably a trick of Antony' to get the Plebeians to think back to cheering Caesar' brilliant victory) the mantle served Antony well and helped him to sway the Plebeians onto his side. "I remember the first time ever Caesar put it on, 'twas on a summer's evening, in his tent, that day he overcame the Nervii. Look in this place ran Cassius' dagger through..." Antony is very graphic as he walks the Plebeians through each separate stab wound on Caesar's mantle, but this just makes them more angry with Brutus and the conspirators, which is exactly what Antony wants. In summary, Brutus failed to deeply move the public in his speech, unable to relate more than his view of the turmoil his fellow Romans felt. His dialog centered on politics and patriotism, touched only the surface of the public's emotions. The poet's use of prose shows Brutus as reasoning deliberate in thought and action, and strictly true to character. At a time when the public was near riot, Brutus calms them and convinces them of his love for Rome, stating bluntly that his deed came on their behalf. Brutus could not see, perhaps blinded by his nobility, that a mob once ready to start a riot still has a smoldering fuse. His leaving the scene marks the worst blunder possible because the future of Brutus still depended on the words of Antony. Brutus' failure came in not turning this scene into a debate with Antony. Antony' speech, in verse, is one of the most passionate of all of Shakespeare's speeches, and proves so because of the absence of Brutus. ...read more.