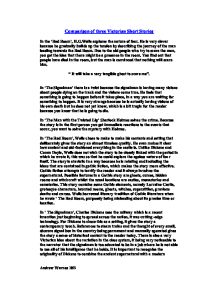 Comparison of three Victorian Short Stories, The Red Room, The Signalman and The Man With The Twisted Lip.

Comparison of three Victorian Short Stories In the 'Red Room', H.G.Wells explores the nature of fear. He is very clever because he gradually builds up the tension by describing the journey of the man leading towards the Red Room. Due to the old people who try to scare the man, you get the idea that there might be a presence in the room. You find out that people have died in the room, but the man is convinced that nothing will scare him. " It will take a very tangible ghost to scare me". In 'The Signalman' there is a twist because the signalman is having many visions about people dying on the track and the visions come true. He feels that something is going to happen before it takes place, in a way you are waiting for something to happen. It is very strange because he is actually having visions of his own death but he does not yet know, which is a bit tragic for the reader because you know that he is going to die. In 'The Man with the Twisted Lip' Sherlock Holmes solves the crime. Because the story is in the first person you get immediate reactions to the events that occur, you want to solve the mystery with Holmes. In 'The Red Room', Wells chose to make to make his contents and setting that deliberately gives the story an almost timeless quality. ...read more.

The three elder people believe that it is haunted and dare not even go there. Opposites build drama and drama builds tension. This is the perfect example of how opposites build tension. Firstly, we have the young against the old, which also symbolises the inexperienced against the wise. There is also the conflict between 'unwary' and the 'wise'. Although they may be wise, the older people have not ever dared to go to the red room. They have become wise as they have heard the stories about the room but none of them has ever had first hand experience of the room. Repetition is also a device used by writers to build tension. One of the most obvious examples is on the first page. 'It's your own choosing.' The old man is trying to warn the young man but at the same time he is leaving the 'decision' to him. It is as if the three old people are removing themselves of their responsibility of the young man. It is their duty, like guardians, to warn the man of what they believe is to be his death. Another use of repetition is on page two where the old woman keeps on repeating, "this night of all nights." We never find out why that night is important but it gives the reader a question. Although we are going to find out when we read on; we want to have answers and this continues our interest into "why was that night important?" In this story, the location is very important. ...read more.

Nothing is actually in the room except what one believes is there. The tension in the story is the unknown. Any passage relating to the unknown could build tension. Language plays an important part and changes with characters. The old people have an old English vocabulary, whereas the young man is given a very upper class and stylish vocabulary. Around the tense moments of the story, the language relating to the young man's experience is described in very short sentences with a lot of punctuation. The climax to 'Twisted Lip' is more indirect, no chases or fights, its simply the suspense, as in 'Front' to find out what happened to Neville, the writer uses a good technique to keep the suspense on the readers, he writes that it looks like Holmes knows what happened and as it is narrated by Watson the truth isn't found out till Watson finds out; the last few paragraphs after Holmes gets to the police station and shows that Boone the cripple is Neville st. Clair. This is especially successful after the long speech between Holmes, Neville's wife and Watson. Holmes mostly creates the conversation, but this long conversation brings everything into a summary and can put the reader on the edge of their seat. The build up to the ending of the story however is very effective, as it is written through the eyes of an almost 'secondary' character, meaning Watson isn't the one solving the clues in fact he doesn't help much at all, looking at the story at this angle it is very successful and is also more realistic. Andrew Warnes 10B ...read more.