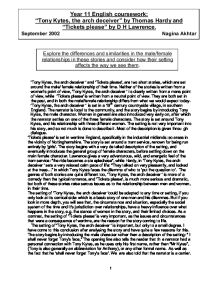 'Tony Kytes, the arch deceiver ' and 'Tickets please', are two short stories, which are set around the male/ female relationship of their time. Neither of the stories is written from a woman's point of view, 'Tony Kytes, the arch deceiver ' is clearly written from a mans point of view, while 'Tickets please' is written from a neutral point of view. They are both set in the past, and in both the male/female relationship differs from what we would expect today. 'Tony Kytes, the arch deceiver ' is set in a 19th century countryside village, in southern England. The narrator is local to the community, and the story begins by introducing Tony Kytes, the male character. Women in general are also introduced very early on, after which the narrator settles on one of the three female characters. The story is set around Tony Kytes, and his relationship with three different women. The setting is not very important into his story, and so not much is done to describe it. Most of the description is given through dialogue. 'Tickets please' is set in wartime England, specifically in the industrial midlands: so areas in the vicinity of Nottinghamshire. The story is set around a tram service, renown for being run entirely by 'girls'. The story begins with a very detailed description of the setting, and eventually introduces the general group of female characters, before settling down on the main female character. Lawrence gives a very adventurous, wild, and energetic feel of the tram service: "the ride becomes a steeplechase", while Hardy, in 'Tony Kytes, the arch deceiver ' sets a very relaxed calm pace of life: "They talked on very pleasantly, and looked at the trees..." in which Tony Kytes faces the dilemma of who to 'put the question to'. The genres of both stories are quite different too, 'Tony Kytes, the arch deceiver ' is more of a comedy then the typical romance, and 'Tickets please', is much more serious and dramatic, but both of these stories raise serous issues as to the relationship between men and women, in their time. ...read more.

We are given the hint that he may be indulging in sexual relationships with the women, when the narrator mentions: "The girls quit the service frequently" There is no evidence in the text, but a strong suggestion he may have made these women pregnant. In Tony Kytes there would definitely be no sex before marriage. The main reason for this is because of the community disapproved of this and parents would also not accept sex before marriage. If Tony Kytes were to live in the time of John Thomas he may have had a sexual relationship before marriage. John Thomas is a 'cock of the walk' that adores attention from the women and is alight in the presence of women: "He seemed to be sunning himself in the presenceof so many damsels". He belongs with the ladies because when Laura Sharp said 'ladies only', John Thomas replies with 'That's me!' John Thomas had 'all the arts of love making' and he was 'especially good at holding a girl'. This shows his seductive charms and how experienced he is. Still John Thomas is shallow and lacks commitment. He was consciously working his way through the women working on the trams and left them distraught. He had no sense of commitment, which shows him to be the opposite of Tony Kytes. John Thomas 'hated intelligent interest' and he intended to remain a 'nocturnal presence'. There was an imperious refusal to share Annie's affections. John Thomas didn't want to become an individual to Annie. He never has to face any consequences until Annie. Still he shows Annie that he has moved on to his next women by his actions: "Letting her see by the movement of his head that he had gone away to somebody else for the time being". The mother of one of the ex-workers - Ceasy Meakin disapproved of John Thomas as she made her leave the tram service:"Her mother made her leave. ...read more.

Tony declares 'not a word of it'. Once again he is deceiving Milly and his charms get the better of her as she accepts him. But we know the circumstances forced her to that decision. All three girls want to get married, because if you were not married, a woman had nowhere to go. She could not independently finance herself, so it was very important to find a husband as soon as you could. As a comparison, the relationship between man and women in both stories are very different. This is because of the opportunities available at that time, the circumstances, and most importantly, the social system. Both of these stories teach us a lot about the relationships of their time. Although "Tony Kytes", is a comedy, and there is no real moral to it, behind the humour we can learn a lot about the situation of young women at that time. In "Tickets Please", the story is left open ended, but we can still learn that during the war, women became more personally and sexually liberated. The women of "Tony Kytes" are desperate to get married, even though they know they know Tony has been unfaithful to them. We know this is because of their situation. In "Tickets Pease", there is no great emphasis on marriage, relationships are short term, and marriage is even made a mockery out of, by asking Jhon Thomas to: "choose one". Both these stories and their portrayal of relationships, differs from what would be seen today. Womn are much more liberated, and are seen as to have equal rights with men, for this reason they can be financially independent, and are no longer seen as 'just the homemakers'. Although short-term relationships are common nowadays, women would not let someone like John Thomas seduce them that easily. Overall, Tickets please is much closer to today's relationships. But I prefer "Tony Kytes" as a story, because there is a certain innocence in the relationships, something no longer found in today's relationships, or those in "Tickets Please". 1 ...read more.