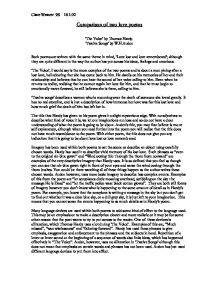 Comparison of two love poems 'The Voice' by Thomas Hardy and 'Twelve Songs' by W.H.Auden.

Comparison of two love poems 'The Voice' by Thomas Hardy. 'Twelve Songs' by W.H.Auden Both poems are written with the same theme in mind, 'Love lost and love remembered'; although they are quite different in the way the author has put across his ideas, feelings and emotions. 'The Voice', I would say is the more complex of the two poems and is about a man pining after a lost love, hallucinating that she has come back to him. He dwells on his memories of her and their relationship and believes that he can hear the sound of her voice calling to him. Even when he returns to reality, realising that he cannot regain her love for him, and that he must begin to emotionally move forward, he still believes she is there, calling to him. 'Twelve songs' describes a woman who is mourning over the death of someone she loved greatly. It has no real storyline, and is just a description of how immense her love was for this lost love and how much grief the death of him has left her in. The title that Hardy has given to his poem gives it a slight mysterious edge. With no adjectives to describe what kind of voice it is, we let our imaginations run lose and so do not have a clear understanding of what the poem is going to be about. ...read more.

Again, Auden has not used any onomatopoeia's in this poem. Another language device is repetition, which has been used in both poems to emphasise a particular phrase or event. "Woman much missed, how you call to me, call to me" is an example from 'The Voice' of repetition that Hardy has used. This shows that a man is dwelling on the sound of her voice calling to him. An example from 'Twelve Songs' is "He was my North, my South, my East and West, My working week and my Sunday rest, My noon, my midnight, my talk, my song". This is putting emphasis on the fact that her lost love had meant everything to her and that she thought of him all the time. Both poems also contain rhyme. In 'The Voice', rhyme is present on every first and third line and on every second and fourth line. Thus giving each verse a flowing and constant rhythm. In 'Twelve Songs' however, rhyme is used on every first and second line, and on every third and fourth line, which gives each verse a very firm but abrupt rhythm. Metaphors are another language device, which have been used in the voice. "You being ever dissolved to wan wistlessness" is an example of a metaphor from 'The Voice'. ...read more.

'The Voice' on the other hand, has a much more dreamy atmosphere to it and you sense that it took place quite a while before the events in 'Twelve Songs' happened. Phrases such as 'Original air-blue gown' and 'Wan wistlessness' give a slightly old-fashioned edge to the poem. 'The Voice' has a sense of development within the poem that is not present in 'Twelve songs'. The emotions and feelings of the man change throughout the poem giving the effect of time passing and the man aging. In conclusion I would say that I preferred 'Twelve songs' although this does not mean that 'The Voice' is not a successful love poem. 'Twelve Songs' is based on a very basic theme that is described by using a explanation of everyday items that people can relate to easily to get the message across. It is less complex, easier to notice and understand the deeper meaning behind the poem. I found it more enjoyable to read than 'The Voice' and the poem has a much lower standard of vocabulary than 'The Voice', which makes it much easier to read and determine. 'The Voice' however a very detailed storyline behind the words that are written, which you could delve into for hours and keep finding out new things about the poem. It has a much deeper meaning than 'Twelve Songs' giving the poem a very poetic atmospheric effect. Clare Weaver 9S 18.1.02 ...read more.