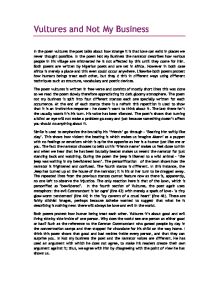 Comparison of Vultures and Not my Business

Vultures and Not My Business In the poem vultures the poet talks about how strange it is that love can exist in places we never thought possible. In the poem Not My Business the narrator describes how various people in his village are mistreated he is not affected by this until they come for him. Both poems are written by Nigerian poets and are set in Africa. However in both case Africa is merely a place and this even could occur anywhere. Likewise both poems protest how humans beings treat each other, but they d this in different ways using different techniques such as structure, vocabulary and poetic devices. ...read more.

Simile is used to emphasize the brutality his 'friends' go through - 'Beating him softly like clay'. This shows how violent the beating is which makes us imagine Akanni as a puppet with no feelings or emotions which is quite the opposite as her is a human just like me or you. The fact the narrator chooses to tells us his 'friends name' makes us feel close to him and when we hear that he has been brutally beaten makes us resent the narrator for just standing back and watching. During the poem the jeep is likened to a wild animal - 'the jeep was waiting in my bewildered lawn'. ...read more.

Vultures it's about good and evil living side by side inside of one person. Why does the world see one person as either good or bad? Such as the reference to the German Commandant who gassed people by day in the concentration camps and then stopped for chocolate for his child on the way home. I think this poem shows that good and bad resides inside every person, and that they can surprise you. In Not my business the poet and the narrator voices are different. He has used an argument with which he does not agree, to make his readers create their own argument against it; thus, we agree with him by disagreeing with the point of view he has shown us. ...read more.