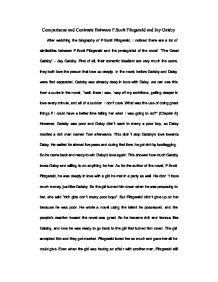 Comparisons and Contrasts Between F.Scott Fitzgerald and Jay Gatsby After watching the biography of F.Scott Fitzgerald, I noticed there are a lot of similarities between F.Scott Fitzgerald and the protagonist of the novel "The Great Gatsby" - Jay Gatsby. First of all, their romantic idealism are very much the same, they both love the person that love so deeply. In the novel, before Gatsby and Daisy were first separated, Gatsby was already deep in love with Daisy, we can see this from a quote in the novel, "well, there I was, 'way off my ambitions, getting deeper in love every minute, and all of a sudden I don't care. What was the use of doing great things if I could have a better time telling her what I was going to do?" ...read more.

So he became rich and famous like Gatsby, and now he was ready to go back to the girl that turned him down. The girl accepted him and they got married. Fitzgerald loved her so much and gave her all he could give. Even when the girl was having an affair with another man, Fitzgerald still wrote letters to her and showed how much he cares about her. From these, we can see Gatsby and Fitzgerald are similar on romantic idealism. In addition, not only their romantic idealism was very similar, so was their fate. In the novel, Gatsby and Daisy fell in love with each other at the beginning. However Gatsby failed to hold on to this relationship because he was poor. Then he waited for a long time and finally he got rich. ...read more.

From the above examples, we could see Gatsby and F.Scott Fitzgerald were very similar regard to several things. Yet there're a few differences between the two. For example, their backgrounds were different. Fitzgerald was a writer and went to college. He got rich by writing novels and he was writing literatures for all his life. Gatsby on the other hand, was a bootlegger, which was considered illegal at that time, a quote from the book that proves he was a bootlegger: "he and his wolfshiem bought up a lot of side-street drug-stores here and in Chicago and sold grain alcohol over the counter. That's one of his little stunts. I picked him for a bootlegger the first time I saw him, and I wasn't far wrong" (Chapter 7). In conclusion, the author of the novel "The Great Gatsby" - F.Scott Fitzgerald, and the protagonist of the novel - Jay Gatsby, are very similar regarding on many things, but they do have a few differences. ...read more.