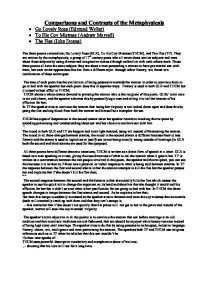 Comparisons and contrasts of poems; Go lovely rose; the flea; to his coy mistress

Comparisons and Contrasts of the Metaphysicals * Go Lovely Rose (Edmund Waller) * To His Coy Mistress (Andrew Marvell) * The Flea (John Donne) The three poems covered are; Go Lovely Rose (GLR), To His Coy Mistress (THCM), and The Flea (TF). They are written by the metaphysicals, a group of 17th century poets who all wrote about similar subjects and went about these subjects by using diverse and imaginative means although unfamiliar with each others work. These three poems all have the same subject; they are about a man persuading a woman to have pre-marital sex with them, but each writer approaches this aim from a different style- through either flattery, wit, threat or a combination of these techniques. The tone of each poem has the similar aim of being persuasive towards the women in order to convince them to go to bed with the speaker but each poem does this in separate ways. Flattery is used in both GLR and THCM but it is used to best effect in THCM; "An hundred years should go to praise" "An age at least to every part," THCM shows a whole stanza devoted to praising the woman who is the recipient of this poem. GLRs' main tone is wit and charm, and the speaker achieves this by personifying a rose and telling it to tell the woman of his affection for her; "Bid her come forth, Suffer herself to be desired, And not blush so to be admired." ...read more.

"Thou by the Indian Ganges' side Should'st rubies find: I by the tide" - this metaphor describes how she is beautiful and should be next to the Ganges; a wonderful and mysterious place that is being explored by the great explorers. This tells her that he finds her exotic and refreshing; complimenting her appearance but also personality. THCM uses a variety of techniques the most effective technique is the way time is used to structure the poem. In the first stanza the question is asked; "Had we but world enough, and time," - the speaker tries to make time a questionable subject, he says that if there was time they would spend the days loving each other, but there is no time for this. He then starts to elongate time; "Love you ten years before the Flood;" - this shows a time long ago and is also a bible reference. "Till the conversion of the Jews." - this shows an unknown and mystifying time in the future. These lines show that his love is undying, although this may not be true he still says it, he goes on further to show how much he loves and appreciate her in the first stanza. In the second stanza time becomes faster and it seems to be coming after them stopping his appreciation, the speaker says that death will take beauty from her and that death is drawing nearer and is inevitable so why should they wait; "Time's winged chariot hurrying near;" This is the same in GLR when the speaker tells ...read more.

In TF John Donne writes of how the flea: "suck'd me first, and now sucks thee"- this clever use of 17th century literature shows the use of 's' as in the times the letter 's' could be written so that it appeared like an 'f' changing the context of this line dramatically. GLR shows an equally hidden message as Edmund Waller writes of the roses' death; "Then die!" - this can be interpreted as the withering and essential death of the rose or by the old-fashioned term 'a little death' which would represent an orgasm. THCM contains a more discrete use of language showing the knowledge of word origin used; "And your quaint honour turn to dust," - the word quaint as used in this structure could also refer to the former meaning of 'queynte' which essentially referred to the original word 'cunt'. The metaphysical poets all use the sense of flattery and persuasion to change the mind of the woman of their affections. The speaker in each poem always uses a good sense of wit and charm and offers a good argument by telling of the dangers and consequences of not having sex with him. The poems all contrast with the way in which they approach the subject; GLR writes as if he is a secret admirer, THCM gives a reasonable argument showing both sides of the argument and TF shows a sense of quick-witted reaction to trick the woman into doing what he wanted her to do and then changing the argument around. ...read more.