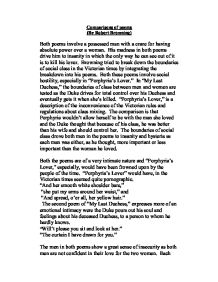 Comparisons of 'Porphyria's lover' and 'My last Dutchess'.

Comparisons of poems (By Robert Browning) Both poems involve a possessed man with a craze for having absolute power over a woman. His madness in both poems drive him to insanity in which the only way he can see out of it is to kill his lover. Browning tried to break down the boundaries of social class in the Victorian times by integrating the breakdown into his poems. Both these poems involve social hostility, especially in "Porphyria's Lover." In "My Last Duchess," the boundaries of class between men and women are tested as the Duke drives for total control over his Duchess and eventually gets it when she's killed. "Porphyria's Lover," is a description of the inconvenience of the Victorian rules and regulations about class mixing. The comparison is that Porphyria wouldn't allow herself to be with the man she loved and the Duke thought that because of his class, he was better than his wife and should control her. ...read more.

Each one kills their lover due to irrational views, mostly influenced by the social hostilities of their time. In "Porphyria's Lover" the woman he loves is of a higher social standard than him and he must feel very insecure about his love for Porphyria as he doesn't feel confident to keep his love for her ablaze. Both the poems show a sense of power needed by the men. Each man desires to control the woman in his life and the only way to get this ultimate power over them is to kill them. The man in Porphyria's Lover desires to control his lover for one perfect moment in his life. He desires to make sure that he and his lover can be happy forever. "So glad it has it's utmost will" In My Last Duchess the man is freely expressing how the woman he gave a nine hundred year old name to doesn't show him enough respect. ...read more.

Anyone with a right mind would not have told the representative of the woman he's going to marry about the mysterious and baffling disappearance of his late wife. If the representative finally realised with what the Duke had been saying, then he would not have deemed the Duke fit for marriage with this woman. The man in "Porphyria's Lover" seems to think that killing his lover was the right thing to do. "And yet God never said a word." He thinks that because God never expressed his dissatisfaction with what he did, so he must be right. Both the men are undoubtedly psychopathic, to confirm these comments each man in the poems kept a reminder of each of his victims close to him. The man in "Porphyria's Lover" kept his lovers corpse, which highly unimaginable and must mean that the man is highly disturbed. The Duke in "My Last Duchess" kept a life-like portrait of his lover behind a closed curtain. He uses it so that he can have complete control over his wife, which is very possessive and very disturbing. By Dean Jolley 10TY ...read more.