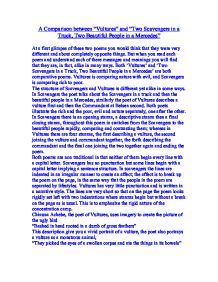 This is very effective because the reader already has an awful image of a vulture in their head and then to say that this man is as evil if not more gives great impact to the reader. Likewise the poet of Scavengers also uses imagery to describe the different people in the poem. "Grey iron hair and hunched back, like some gargoyle Quasimodo" "A hip three-piece linen suit with shoulder length blond hair" These two descriptions of the different people are very contrasting not just in appearance but the poet also uses these descriptions to show the different life's these people live. The poet of Scavengers uses repetition to build up effect. In the opening stanza, when describing the beautiful people in a Mercedes, the poet uses the word 'elegant' to describe both the car and the couple. Lawrence Ferlinghetti, the poet of Scavengers, uses repetition here to convey how rich and important these people are. In the same way the poet of Vultures uses alliteration. ...read more.

I perceive the underlying message behind the political meaning to be one of hope because towards the end he says, "As if anything at all were possible" I think he means in the future equality may be possible. The point the poet is trying to make in vultures is that while we may not like what vultures do, it is there nature to do those things but for a human to behave in a similar way is inhuman. His behaviour is compared with a normal human in his relationship with his child. The very last stanza invites the reader to think about whether this humanity is good, because even somebody who acts in a monstrous way can also act in a human like way, or bad, because it shows that ordinary people can act in an evil way. I think both poems are trying to show the readers how others live. They describe the different hardships people have to live with, being discriminated against, not having rights or equality. The two poems prove that the world is not a perfect place and that we shouldn't take everyday possibilities for granted, because some people don't get chances. ...read more.