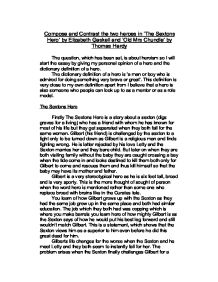 Compose and Contrast the two heroes in 'The Sextons Hero' by Elizabeth Gaskell and 'Old Mrs Chundle' by Thomas Hardy The question, which has been set, is about heroism so I will start the essay by giving my personal opinion of a hero and the dictionary definition of a hero. The dictionary definition of a hero is 'a man or boy who is admired for doing something very brave or great'. This definition is very close to my own definition apart from I believe that a hero is also someone who people can look up to as a mentor or as a role model. The Sextons Hero Firstly The Sextons Hero is a story about a sexton (digs graves for a living) who has a friend with whom he has known for most of his life but they get separated when they both fall for the same woman. Gilbert (his friend) is challenged by the sexton to a fight only to be turned down as Gilbert is a religious man and finds fighting wrong. He is latter rejected by his love Letty and the Sexton marries her and they bare child. But later on when they are both visiting family without the baby they are caught crossing a bay when the tide come in and looks destined to kill them both only for Gilbert to come and rescues them and thus kill himself so that the baby may have its mother and father. Gilbert is a very stereotypical hero as he is six feet tall, broad and is very sporty. ...read more.

As with most deaf people they learn to lip read as they rely more heavily on there other senses too decipher speech. This is normally brought about by a doctors recommendation or interaction with other humans with either/or of the above not occurring this obviously proves isolation as she would have had practice experienced either one of the two. Also second section of evidence is found on the second page where the curate asks of a road running in close proximity to her home and is only three mile to the nearest town named Enkworth yet she has never visited there. To achieve this feat so that Mrs Chundle can receive the sermons the Curate firstly gets an ear trumpet for Mrs Chundle but that fails to help as she tells him the next day that 'You might as well have been mouthing at me from the top O' Greech Barrow.' This shows that she is still isolated, as she doesn't mention a well known hilly area but that of a local one. However this doesn't stop the Curate. So instead of the ear trumpet he gets a pipe installed which links Mrs Chundle's ear to the pulpit. This is Latter removed because the Curate can't stand her breathing as she has bad breath and try's to put him off by talking to him about food. 'Accompanied by a suggestion of onion-stew'. This could show that Mrs Chundle likes the Curate as she talks to him about a subject, which she knows is appealing to him. ...read more.

Thirdly he blocked the pipe up like how he blocked her out like hoe he didn't visit her. Mrs Chundle also gives her last piece of admiration to the Curate by leaving him everything in her will. The Curate is also very upset at first and can' believe it as the language and punctuation used when he first learns of the news seems to slow the whole situation down and make it seem more hard hitting ''Dead?...Mrs Chundle dead?' Later at the end of the story it's shown that the Curate puts his heads in his hands and try's to get over the fact that he neglected her on her deathbed. This action shows that he is guilty and remorseful. Conclusion The answer to the question set I think is Gilbert as he gives his life for his friend and the on which he loves when he could have just abandoned his love who rejected him or killed his lovers husband but instead gave his life so that a child would have its parents. However the Curate was a here in a different sense as he used hi intelligence and good nature to make an old woman believe in life a bit more and come out of isolation so that she had friends and became a part of a community who cared about her as you find out half way through the tale the head of the parish who's been situated at the parish for thirteen years knows very little of her yet at the end someone stops the Curate to tell him of her death. ...read more.