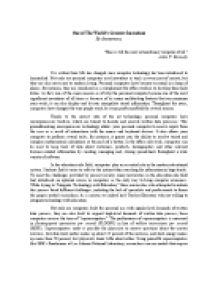 Computers / One of The Greatest Inventions

Transfer-Encoding: chunked ﻿One of The World?s Greatest Inventions By Anonymous ?Man is still the most extraordinary computer of all.? ?John F. Kennedy It is evident how life has changed since computer technology has been introduced to humankind. Not only are personal computers used nowadays as tools in every part of society, but they are also necessary to modern living. Personal computers have become essential in a heap of places; for instance, they are considered as a complement for office workers to develop their daily duties. In fact, one of the main reasons as of why the personal computer became one of the most significant inventions of all times is because of its many multitasking features that can minimize your work; it can also display and let you manipulate stored information. ...read more.

In the education-side field, computers play an essential role in the modern educational system. Students find it easier to refer to the internet than searching for information in large books. To meet the challenges provided by present society, many universities in the education-side field had introduced an optional course in computers as the only way to bring computer awareness. While trying to ?Integrate Technology with Education,? those universities who attempted to initiate this process faced different challenges, including the lack of specialists and professionals to frame the proper needed curriculum. As a society, we indeed lack Teacher Educators who are willing to integrate technology with education. ...read more.

Since the first creation of the personal computer, the world has developed in unforeseen ways. The society in which we live in has been so profoundly affected by computers that historians refer to the present time as the information age. With the increasing demand for different specialties, new adjustments are being made to computers, so they can serve different purposes as they emerge. However, if computers are to benefit from future advances in technology, then there are major challenges ahead, involving understanding how to build reliable systems on increasingly unreliable technology. Nowadays, whether you opt to take the subway, to get a new job, to go to college, or just by starting your car?s engine, one thing is certain: computers are already a reality among us. ...read more.